Dubai Diaries Day 3: A Day of Long Walks and A Visit to Dubai Marina 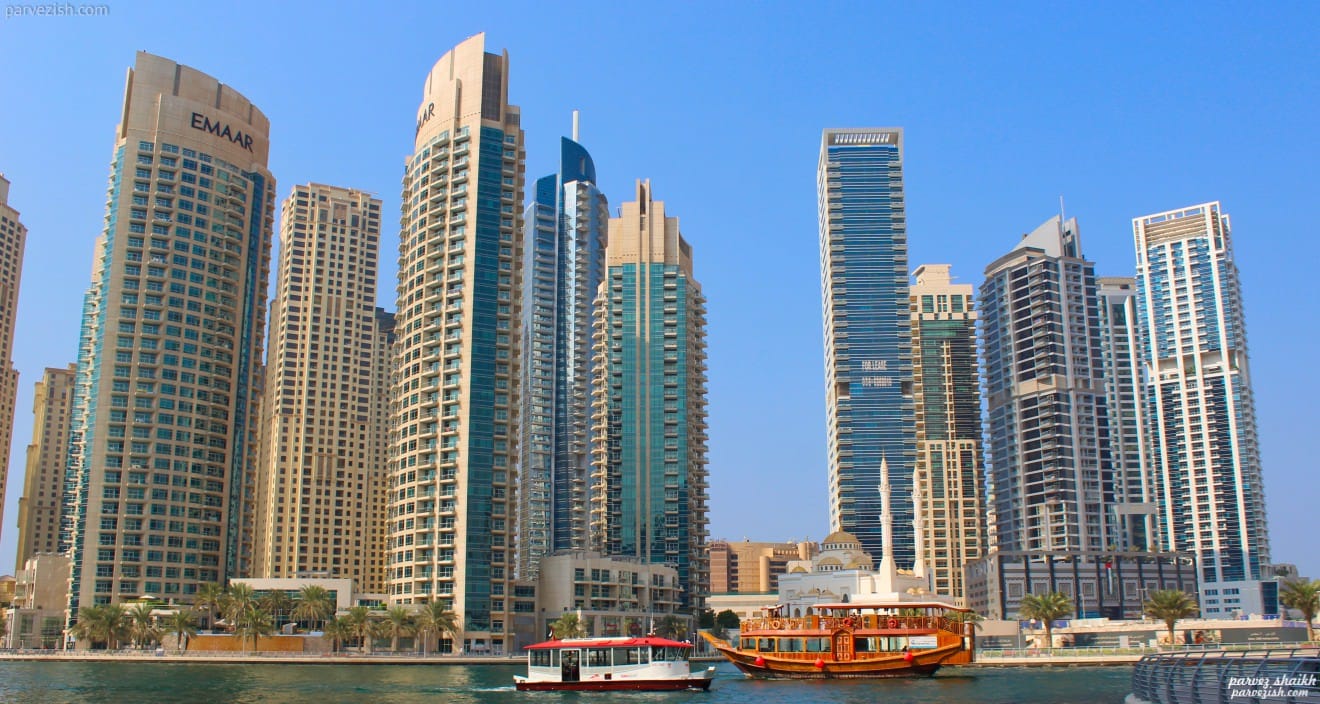 On the third day of my Dubai trip, a visit to Dubai Marina was already planned. I decided to go for some shopping, too. This was one of those rare days when I was actually ready with some plans in my head.

A Long Ride in Dubai Metro

Of course, I couldn’t walk 30KMs from Deira area to Dubai Marina. So I walked straight into the Union metro station, just 5 minutes away from my hotel on foot. I board the train and took one of my longest metro rides in Dubai.

This metro ride from Union metro station to Nakheel (not to be confused with Nakheel Harbor and Tower metro station) lasted about 30 minutes. I got off the train at Nakheel and began my walk into the direction of Dubai Marina. (I later found Damac Properties metro station to be the nearest one to Marina.)

Travel tip: Dubai Metro is the best way of commute in Dubai as all major tourist locations are covered by the service. If you don’t prefer taxis like me, you should use the metro service which saves both time and money.

A Walk Through Dubai Media City

After getting out of the Nakheel metro station, I opened Google Trips app on my phone to find out the direction in which I should be headed. I followed the map for a while until I spotted some construction work going on the road with huge crane(s?) involved. This work was going on around Shatha Tower, which forced me to change my route a bit towards Dubai Media City.

Dubai Media City is a tax-free zone dedicated to media companies. You can spot corporate offices of major global companies like CNBC, CNN, Thomson Reuters etc. here. A similar area called Dubai Internet City is just nearby – which is home to companies like Google, Microsoft and Cisco.

Walking around huge buildings with luxurious cars passing by was an experience of its own. Away from the chaos of the city, this area was calm and I could hardly see someone walking around. I noticed a number of cafes around, where employees from nearby companies came to smoke and relax.

Observing everything and finding my way towards Marina, I met a guy who stopped me to ask for directions. I couldn’t actually help him with that but we spoke for a minute or two. He was new in the city and came from Cairo, Egypt to look for work. He was going for an interview and lost his way.

After wishing him luck with the job, I started walking again, soon passing by Landmark Group HQ. Wait, let me take a photo first.

It wasn’t long before I finally reached Dubai Marina, my destination for the day.

A Relaxing Walk at Dubai Marina

Referred to as ‘most luxurious man-made canal city in the world,’ Dubai Marina is built along 3 kilometers long stretch of the Persian Gulf shoreline. The canal and the walkway were developed in the first phase of development while the second phase of development is currently in progress.

Upon completion of the whole project, Dubai Canal City is expected to accommodate more than 1,20,000 people in some of the tallest residential towers in the world.

Pictured below is the gorgeous Cayan Tower (extreme left) and some other buildings at Dubai Marina. 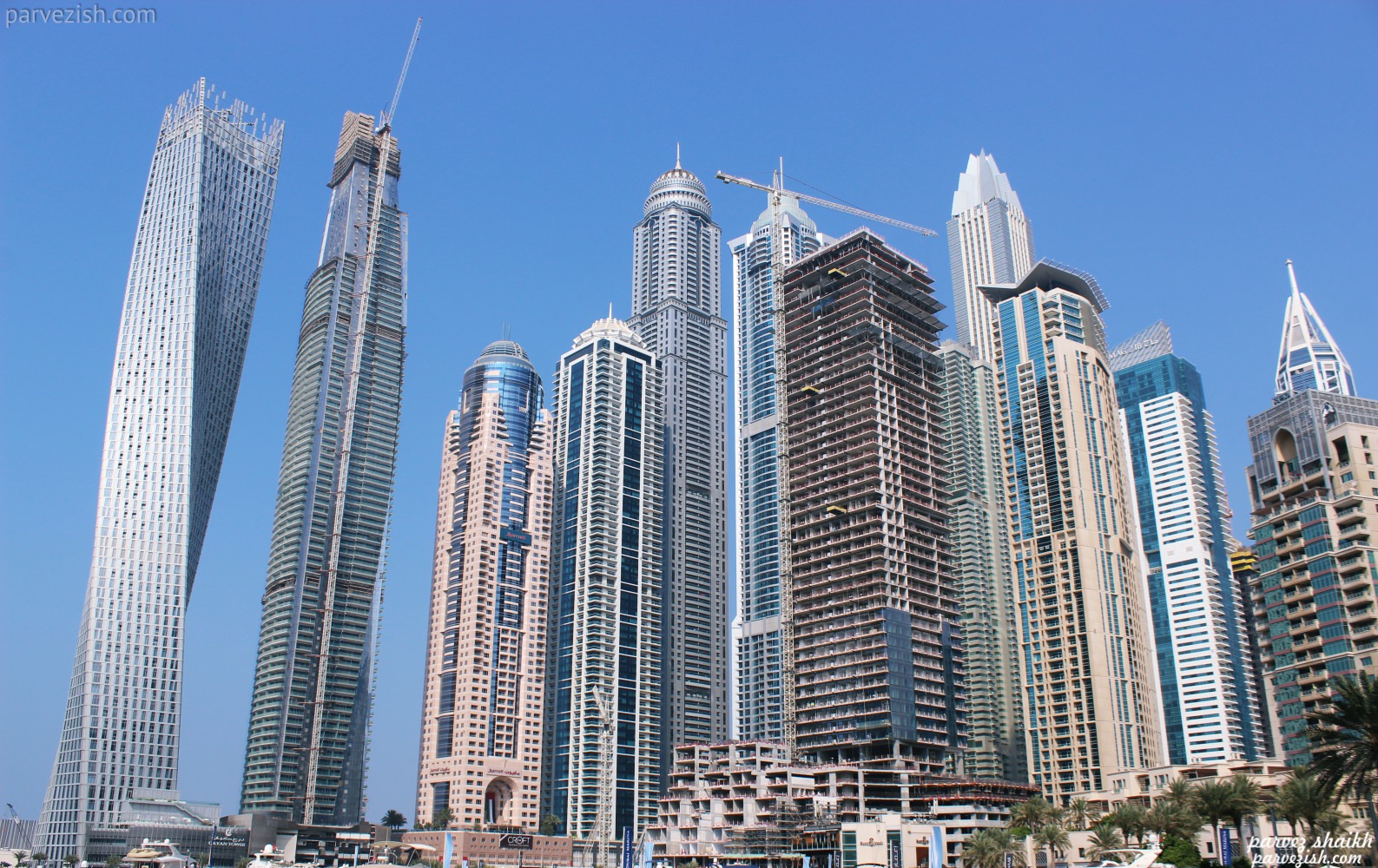 Besides some tall buildings, there are some nice cafe and restaurants along the Marina Walk. These food joints offer everything from local to international cuisine. Sipping tea or coffee while enjoying the relaxing surrounding of Marina is a time well spent here.

I walked around the canal for a long time, snapped some pictures and had a relaxing time before entering the Marina Mall.

Pictured below: A cute little red boat at Dubai Marina. Fancy a ride?

I roamed around Dubai Marina Mall for some time. I wasn’t really ready for shopping, just yet. My first priority was to have lunch as I didn’t have breakfast and was getting hungrier every moment.

The food court on top floor of the mall was heavily crowded. Tourists, locals and employees working in mall shops – everyone was here. I wasn’t in the mood of trying anything fancy and so I decided to go for some fried chicken at Chicken Now.

I’m not sure exactly which dish I ordered and it didn’t matter anyway as I just wanted to feed my hungry stomach. What I’m sure about is the taste and quality of chicken and lemonade – which was good.

I spent some time looking at the photographs I took. Then I penned down notes about my trip to the Dubai Desert the other day. I also opened the map on my phone to decide in which direction my wagon needed to move. Seeing Ibn Battuta mall in close proximity, I decided to give it a visit.

Ibn Battuta – one of the world’s largest themed malls, was about 4.5 to 5 KMs from Dubai Marina. Looking at the map on my phone, I kept walking until I reached Ibn Battuta Mall.

Just so you know, Ibn Battuta mall is my favorite one in Dubai. It’s more like a theme park or something. Each ‘court’ in this mall represents a country Ibn Battuta traveled to. This includes Egypt, Tunisia, Persia, India, China and Andalusia.

I spent a lot of time exploring this wonderful place. I also did some shopping and then finally moved out of the mall, heading in direction of Ibn Battuta metro station.

This ride from Ibn Battuta to Union was my longest ride in Dubai Metro.

Dinner At Some Local Restaurant

After arriving back at my hotel – tired from long walks I took during the whole day – I jumped in the bed to take some rest. After resting for some time, I went for a walk nearby to find some food.

Too tired to go anywhere fancy, I stopped by a local restaurant, just a few steps away from my hotel. I can’t recall the name but it was a place serving many dishes from different places. They had some rice dishes from Japan, for example. But this wasn’t really a place to try any international cuisine for sure, and so I decided to go for the cheapest option available – a shawarma wrap!

Nothing can go wrong with a shawarma, I thought. But I was wrong. The shawarma wrap I had was – I wouldn’t say awful – but not really good. The taste and quality of the shawarma I was holding in my hand wasn’t commendable. I finished that wrap somehow and tried another dish.

I can’t recall the name of this dish either but it had some rice, offered with soup. This experiment didn’t go well either but I didn’t have any complaint at the amount I had paid.

After the dinner, I took a walk around for while before returning to my hotel – ending the third day of my Dubai trip.

Wait. It feels so empty here. Leaving a picture of Emaar Towers, Dubai Marina below. 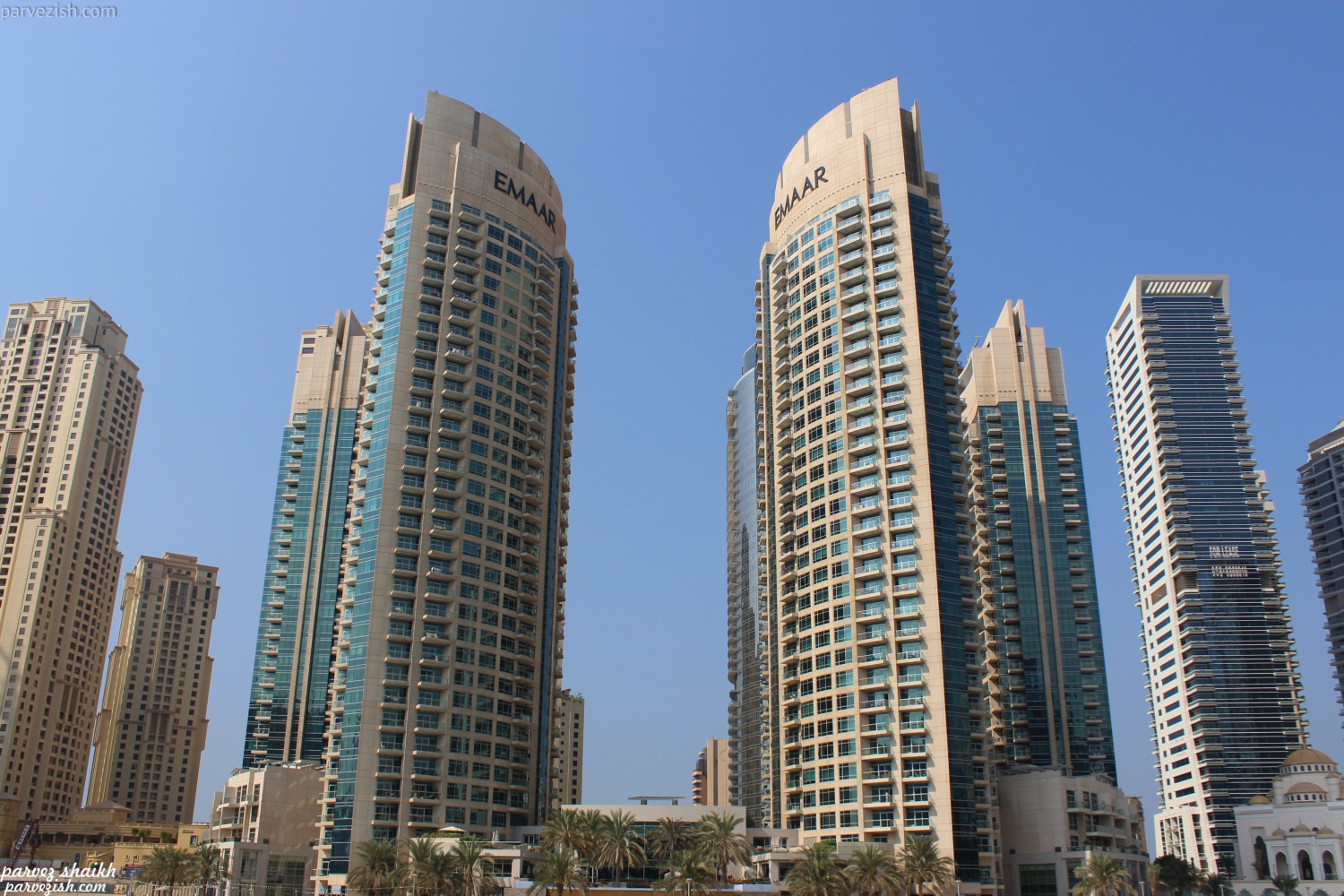 My third day in Dubai was somewhat planned, as I was sure I wanted to visit Dubai Marina. It was a day of long walks. First I walked from Nakheel to Dubai Marina (about 3 KMs). Then I walked at the Marina for about 3 KMs. I roamed around the Marina mall for a while and after lunch at Chicken Now, I took another walk to Ibn Battuta mall, adding another 5 KMs to the total.

Ibn battuta was a huge mall, too. I walked almost the whole mall – adding an uncertain amount to the distance I had walked.

My day ended with a log ride in Dubai Metro from Ibn Battuta mall to Union metro station and some not-so-good dinner at a local restaurant.

Overall, the third day of my Dubai trip was full of explorations and new experience. I felt like Ibn Battuta himself, who spent many years of his youth to explore the world.

That’s it, folks! This was the third part of my Dubai Diaries series. I have two more parts coming up, so stay tuned!

I would love to have your feedback/suggestion about the content of my blog, my writing and anything else you can think of. I would also love if you would share your own travel experiences with me!