The Man Who Owns the ‘BBC World’ in Kathmandu 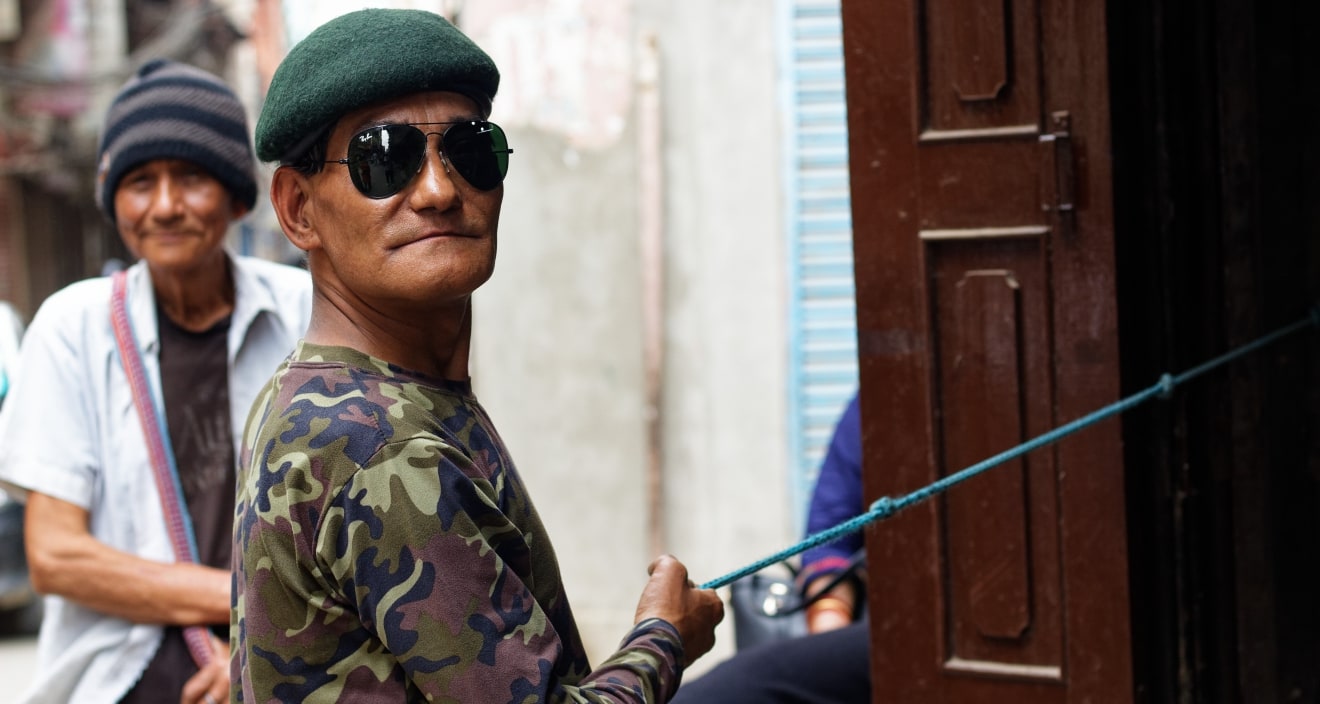 It was a hot summer day in Kathmandu. I was on my way to Durbar Square after meeting my friends Mary and Michel from Quebec, Canada.

Walking through the busy markets of Kathmandu, I stopped here and there to take some street snaps. Just a minute before the entrance to Durbar Square, a small shop caught my attention.

Inside the shop was a man dressed in clothes with military camouflage who was busy doing some work. He didn’t notice me for a moment. When he did, he smiled. I told him my name and asked him if I could take pictures of him. “Sure,” he said with a smile and quickly arranged his army-style cap before posing for a few photographs.

The man I was speaking to was Ram Sundar Bajracharya who invited me inside his shop and made some space for me to sit.

Inside The BBC World

Inside the shop were many metal items — big and small, small and tiny. Some old Hindi songs were playing on a speaker. I asked Ram about those songs and he said he liked the voice of Asha Bhonsle a lot. I said I also liked her voice and he quickly pulled out a different USB stick from his bag to play some gazals by Asha Bhonsle.

As a ghazal started playing, Ram asked me if I would like some tea. I said yes and he went out to a nearby tea stall to order tea for us. He soon returned with two cups of milk tea.

My day was now getting better with lovely music, a cup of tea, and the company of Ram Sundar. In the next three hours that I would spend with him, I was going to have an interesting conversation with Ram.

As we sipped our tea, I took some more pictures of Ram. “Wait. Let me change my cap,” he said and opened his bag. One by one, he took out at least five different hats from the bag. “You have many hats,” I told him. “Not many,” he replied as he wore a cowboy hat and asked me how did it look.

About His Past and His Dream Destination

“So, what exactly do you do, Parvez,” Ram asked me as he carefully re-arranged his collection of hats inside the bag. I explained to him my work related to writing and photography.

“Basically, I like to collect people’s stories,” I told Ram. “I listen to whatever people have to say and give them a voice thorough my photographs and articles.”

“About Sherpas… They are very hard working people, you see Parvez,” Ram told me. “They have a huge contribution in the field of trekking.”

The way he was speaking, I saw a resemblance between Ram and Dev Anand — yesteryear’s huge Bollywood star.

“And Gorkhas…” he continued. “See, Gorkhas are very brave. They are known for their bravery and contribution in armies.”

“Yes, but how often do we talk about the life of Sherpas and Gorkhas beyond mountaineering and contribution in wars,” I asked Ram. “They too have a different life beyond their usual roles. I want to learn and write about that.”

“Did you always do what you’re doing right now?” I asked him. “No, I have done different work here and there before starting this shop,” he said before pulling out his old trekking guide licence from his wallet and asking me to have a look at it. “Look, I also used to be a trekking guide once.”

Ram told me he had walked a lot in mountains. He then got up and pointed to a calendar hanging near the door of his shop (the picture above).

“This. This is my dream destination,” he said with a sparkle in his eyes. “This is where I want to go next.”

I got up and had a look at the picture Ram was showing me. He was pointing at a picture of a lake (I don’t remember the name). “I am slowly preparing to go up there. And I’m sure one day I will be there, finally.”

About the ‘BBC World’

As we spoke, a few people visited Ram’s shop to get their things fixed. Later, another man — Ram’s friend — joined us inside the shop. Ram asked me about my plans for the evening and I told him that I was meeting Mary and Michel for dinner.

“I will go out with my friend and it’s time for me to close the shop. I would like to invite you to a bar that we are going to,” Ram said as he got up and handed me over his business card.

“B.B.C. World,” Ram’s business card reads. I asked him if there was any connection with BBC — the British Broadcasting Corporation.

“No, there isn’t,” explained Ram. “BBC stands for Bronze, Brass, and Copper!”

“My phone number is on this card,” he continued. “Give me a call whenever you come back to Kathmandu. We will leave now. Let me close the shop.”

I got up and walked out of the shop with Ram and his friend. Ram slowly closed the wooden door as nearby shop owners looked and pointed at us while murmuring something between them. We were soon on our way to a place I didn’t even know the name of.

Walking Through the Streets of Kathmandu

As we walked through the streets, I noticed many passersby and shop owners were looking at Ram with a smirk on their face. Some children passed us while pointing at Ram and giggling.

Ram was dressed in clothes with army-style camouflage, black shoes, and an army cap. He had a bag on his right shoulder and walked slowly with his chest out. While people around us looked at him and made fun as he walked with us, Ram didn’t seem to notice or be bothered by them. At some places, he was greeted by young men.

I wanted to ask the reason why he was dressed in army-style attire but it didn’t seem appropriate at that moment. I kept walking with him as he showed me around. He bought some roasted peanuts from a vendor along the way. After a few minutes of walk, we were at the bar.

About His Army Attire

The place we were at was a small, dark bar selling drinks and some food. “Electricity is gone,” said the woman at the shop as we entered.

“What would you like to eat and drink, Parvez?” Ram asked me. “This place sells some really good liver. Would you like some?” Before I could made up my mind on whether I wanted to eat something, Ram ordered some ‘buff liver’ for me. He also brought raksi — the local alcoholic drink — for himself and his friend.

A few minutes later, the woman at the shop returned with a plate of liver and a bowl of a potato tarkari. “Enjoy,” Ram told me as he sipped his raksi.

I tried the liver hesitantly. Just a moment after I took the first bite, I realised how spicy it was! “Do you like it?” Asked Ram before telling me I had to finish it.

It was now raining outside. As I tried to finish the spicy liver dish and potatoes, Ram and his friend talked and enjoyed their raksi.

“So, how do you find Nepal and Nepalis?” Ram asked me. “I have been here a couple of months already. I feel at home in Nepal,” I replied.

He got up and brought more drink. Our discussion bounced between India-Nepal relations, politics, wars, armies, and then finally there was an answer to the question which I didn’t date to ask Ram.

“The reason I always wear this army dress is…” Ram took a pause as he started telling me the reason behind his attire. “I wanted to join the army. But I couldn’t make it. I couldn’t take army training,” he continued. “I like army clothes. I like dressing up this way.”

Now I had the answer to my question but at the same time, I had another question. Why was he not able to join the army? I didn’t ask him this question as I found it unnecessary at the moment (and personal).

A few minutes later, Ram was busy with some other men who were visiting the bar. His friend was busy drinking and occasionally looked at me, shook his head, and smiled. I had almost finished my liver and potatoes.

I looked at my watch and realised I had to leave soon to meet Mary and Michel. It was still drizzling but I decided to leave anyway, hoping to reach their hotel on time.

I told Ram that I would be leaving as he was busy talking to his friends. “You didn’t eat much,” he looked at me with a smile as he said that. “I had enough. Thank you. I still have to go for dinner,” I told him.

“It was nice to meet you, Parvez. You have my number? Call me if you are around,” he told me as he shook my hand. I said I will, and said goodbye to Ram and his friend.

As I was walking in the streets, I was thinking how our intuitions often lead us to interesting encounters in the moment when we least expect them. My encounter with Ram Sundar was also one such event solely based on my intuitions.

Ram was an interesting personality who made me feel very welcomed. During those three hours, I had enjoyed his hospitality, friendliness, and most importantly, the conversation with him.

I was soon at Hotel Jampa where Mary and Michel were waiting for me. A few minutes later, we were on our way to find a place for dinner.

Three days later, I visited Ram Sundar for a few minutes. He was busy polishing some bronze plates. His wife was helping him and his son was also present. “I will be leaving for Pokhara,” I told Ram. “It was nice meeting you and I will come back to see you if I am back in Kathmandu.”

“Anytime!” Ram told me as we said goodbye to each other.