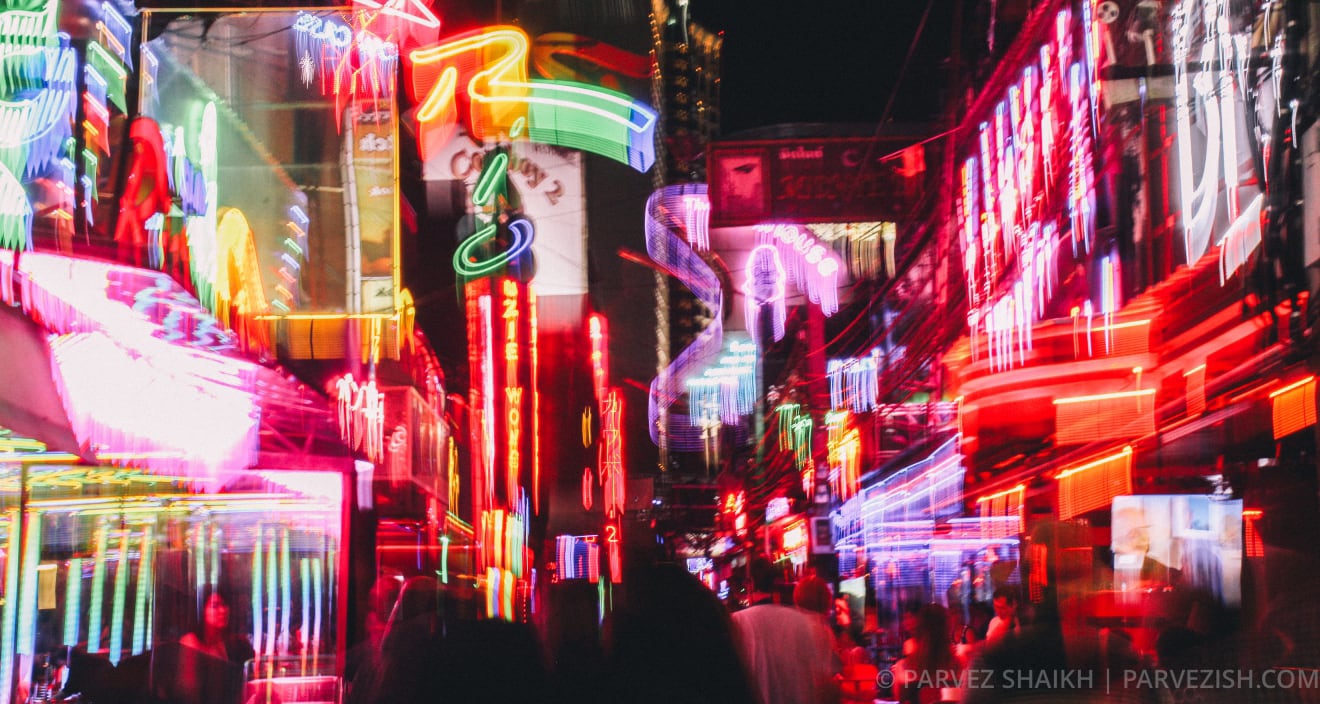 I remember those smirks people gave me when they came to know I was headed to Bangkok. “Ooo, Bangkok, huh?” Some of them asked me. “Have fun,” they added with a strange look on their face.

Now, I don’t know why other people visit Bangkok, one of the most visited cities in the world. But for me, it was like any other destination I would have visited, provided I found a good airline deal and an easy visa.

Some of those people who had been to Bangkok told me there were some ‘shady’ places in the city I should avoid unless I wanted to have ‘fun’ or get in trouble. I knew what they meant by ‘fun’ and I had no such intentions. But I made up my mind that once I reach Bangkok, I will definitely explore these ‘shady’ places.

I spent a few nights with Khalyf – a visitor from Malaysia – at different night markets of Bangkok to experience the nightlife. We also spent a few nights visiting some ‘adult entertainment zones’ where those shady activities take place – according to some travellers I met.

In this article today, I want to share my experience at three of Bangkok’s largest and most popular ‘adult entertainment zones’ aka red light districts – namely Patpong, Nana Plaza, and Soi Cowboy.

Patpong was the first night market we visited in Bangkok. We spent about an hour wandering around the market looking at those cheap ‘A-grade’ counterfeits and other offerings. Those shopkeepers were good at being rude – especially when they came to know that we might buy nothing at all from them.

Then we entered the adult area located just nearby. It was a bit early for the area to be full of visitors. We saw some women helping girls and ‘kathoyes’ (often translated lady boys in English) get ready. Some were applying makeup, others were getting their hair done.

As we walked further, a woman with a ‘menu’ in her hand appeared out of nowhere and started following us. She showed us the menu of activities that took place in those bars and it seemed like all of them began with the term ‘pu**y.’ “We’re not interested,” we told her and she went away — only to appear a couple of times again until she finally realised we were the same people she kept running into.

The same woman came to our rescue when we asked her if there was a place we could use the bathroom. She led us to a bar and disappeared. After using the bathroom, I ended up paying a few Thai Bahts as a ‘tip’ to the nice lady boy who ‘helped’ me wash my hands by turning on the tap and giving me a tissue which was right in front of me! Lesson learned.

Continuing our excursion, we reached a place where some girls in skimpy outfits were dancing in front of a glass door. Their job was to attract visitors to the bar. I could figure – and I can be wrong – that they were not comfortable with their clothes or their job. They appeared bored and exhausted.

The place slowly began to get crowded. Those girls who were getting ready earlier were nowhere to be seen. The woman who wanted us to join one of those ‘ping-pong’ and other shows was now busy luring other visitors. We left the place soon and decided to visit other similar areas in coming days.

A couple of evenings later, we were on our way to Nana Plaza. Having visited Patpong earlier, we had an idea of what to expect.

Near the main gate of the ‘plaza,’ we saw some men with local ladies — their ‘love interests’ for the night. As we entered the place, we saw more men along with local women sitting at a bar. Booze was flowing freely at those tables. Those women seemed to be exaggerating every expression they exchanged with the men and those men seemed proud of their muses.

Nana Plaza proudly terms itself the ‘world’s largest adult playground.’ Bars are located on the ground and the first floor. As you enter the place, you see a makeshift temple where all workers would bow down and pray before getting on their job.

Nana Plaza was more crowded than Patpong. Different bars with suggestive names were spread across both floors. Many of those bars had signs saying ‘100% real ladies only.’ Apparently, some bars employ nice looking lady boys and present them as women to their visitors.

As we made our way to the first floor, we were spanked by some lady boys who wanted us to enter their bar. At one point, I had myself whipped and pulled inside a bar and I had to convince them I would return later. A beautiful lady boy asked us to join her for drinks and I told her we couldn’t.

At a corner of the first floor was a salon simply named ‘Beauty Shop.’ When we reached there, some ladies at the door made some suggestive gestures. I decided to enter while Khalyf waited outside.

Many girls and ‘lady boys’ were getting ready for the night. Sitting in a corner was a lady boy — possibly the owner or manager of the shop. I asked if I could do some photography. I assured them that I will make sure my photos don’t include their faces but they politely refused.

“These workers have their regular life as well,” they told me. “Many of them have come here directly from work and are now getting ready. It puts their professional and personal life at risk.” I told them I respected that and asked if I could sit there for a while. They nodded and I sat there observing those workers getting ready.

A few minutes later, I left the place after thanking the person for letting me stay. Nana Plaza was now thriving more than when we had entered. After spending some more time walking past those bars and talking to some people, we were on our way to the main gate.

Soi Cowboy was the most crowded adult zone we visited. From the beginning to the very end of the street, the place was bustling with visitors. Just like visitors, the whole place was full of young ladies and lady boys working at those bars.

Sitting outside the bars, these ladies in seductive outfits were busy luring visitors to join them for their shows. We took a chair outside a bar and a woman asked us if we needed anything. When we responded negatively, her face turned from friendly to rude and she told us that we better left the place if we weren’t ordering anything.

We obliged and walked further to do some photography. Those red lightings all over the place made this a picturesque place. We also met an Irish man who shared with us some of his ‘knowledge’ on different topics like drinks and women. He showed us his bill for the evening to give us a hint of how much had he drank already.

As Khalyf got busy talking to a girl working there, I took a walk around the place. I complimented a girl that she looked beautiful and she asked me if I would join her inside. I politely declined her offer and walked further.

After a while, we found ourselves in front of a gay bar. “Won’t people think we’re gay, too?” We blew this question away quickly as nobody would have cared, anyway.

We took our seats and talked for a while. We had found Soi Cowboy to be the most interesting of all three adult entertainment zones we had visited and decided to pay another visit soon.

I don’t drink. I don’t smoke. And I didn’t have any desire of attending those adult shows. But I wanted to explore the so-called ‘shady’ areas to observe and to learn more about these places.

I visited Patpong, Nana Plaza, and Soi Cowboy — three of Bangkok’s largest and most popular red light districts. Although we didn’t attend any of those ping-pong shows or get drunk or took ‘a girl out’ like many other visitors, we had a lot of fun at all these places.

A large number of young girls work at these adult ‘playgrounds’ — some of them also work during the daytime at other jobs. These places speak of Bangkok’s interesting nightlife as well as of a thriving economy. I read about ‘incidents’ taking place in these areas but we didn’t come across any.

Different people have different expectations when they come to Bangkok — especially in these adult areas. For me, however, it was nothing more than an experience which taught me a few things about the city, its nightlife, its culture, and its people. All these areas have a different charm in them and I loved spending my time there.