When sounds make you go crazy. 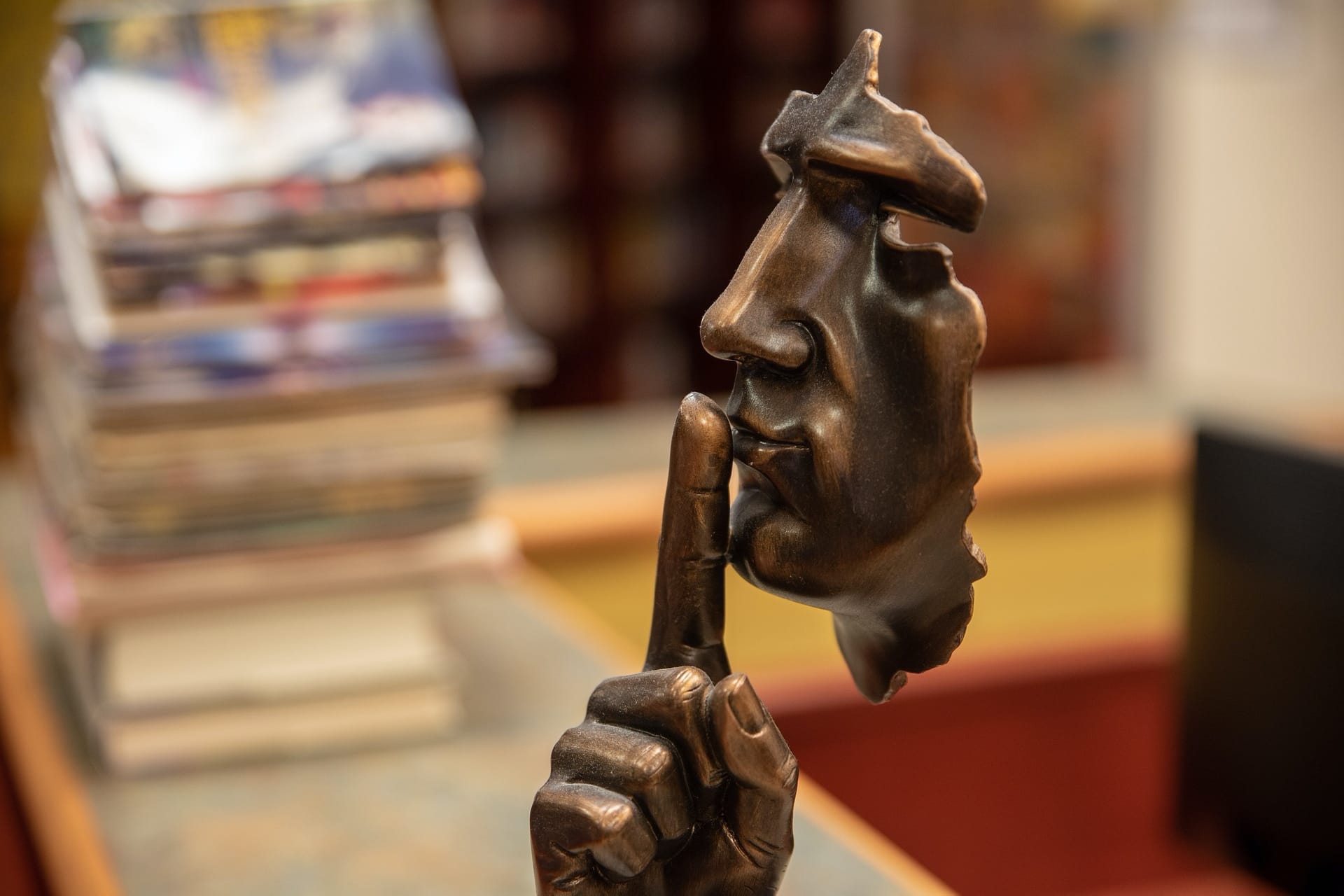 On a plane to Vietnam, I am swiping pages of the in-flight magazine, trying to find some articles worth reading between the pile of flashy advertisements. I start reading a page but my focus is soon taken away by the sound of a wrapper being opened behind me. The sound continues for a few seconds while I try to focus again. Following soon is the crunchy sound of chips being crushed between teeth. I try to continue reading but every attempt is followed by a crunch. I take a deep breath, put the magazine aside, pull out my headphones, put some music on, and close my eyes.

A few days later, I am in my room, lying on the bed with my eyes closed and ready to fall asleep. I am thinking about the day that has just passed and what may come tomorrow. “Tick-tock, tick-tock, tick-” the clock in the room is doing it’s job and in the process, it’s making sure I can’t fall asleep. I close my eyes again and try to sleep while the clock continues ticking. No success. I try to get over the fact that this is what a clock does — it ticks — and I should ignore the sound. It doesn’t help. A few minutes later, I get up, pull the battery out of the clock, and try to sleep again. The next morning, I wake up looking at the clock stuck at 1:40.

This discomfort — triggered in a very normal, usual situation — is something I have dealt with every day since as long as I can remember. A few years ago, I found out that a term exists for it and it’s called ‘misophonia.’ In the years preceding and following my ‘discovery’ of this term, I have rarely tried talking about it with someone. After thinking of writing about it for a long time, I finally want to share what is it like living with misophonia.

Misophonia — a Greek term — is generally referred to as the ‘hatred’ of sounds. Some are a bit easier on the term and call it the ‘dislike’ of sounds. I prefer misophonia being referred to as the ‘selective sound sensitivity syndrome.’ Because rather than a full-on hatred of all sounds in general, this condition is triggered by some particular sounds. These triggers cause an emotional reaction in a misophonic. Misophonia is different than phonophobia (also known as sonophobia) where a person is afraid of sounds.

Sounds like lip-smacking, chewing, tapping fingers on a surface etc. act as triggers to a misophonic, causing a fight-or-flight response. It’s worth noting that this reaction is not necessarily caused by loud sounds. It’s often the quiet, low sounds that you hear around you in daily life and may not pay attention to. The severity of this hatred or discomfort varies among people. It’s possible that what triggers my reaction may not trigger someone else with the condition.

People with misophonia often land into uncomfortable situations. Because the triggers include common sounds, it’s hard to cope with misophonia in everyday life. For some people, this leads to the loss of social life and isolation as they try to avoid dealing with such situations. This could also impact their personal and professional decisions.

Due to lack of awareness, people with misophonia are often considered to be ‘jerks’ for their reaction or made fun of (by repeating the sound, for example). Misophonics may avoid talking about it because they think people may not believe or understand them. Even worse is when your family and close friends do not understand it. It’s frustrating how others can blissfully ignore those annoying sounds while my blood is boiling in rage.

Misophonia is not a classified condition and there’s little research that sheds light on the topic. There is no particular method to diagnose or treat the condition.

Some Usual Triggers and Reactions

In addition to some sounds that affect me, some people also mention being triggered by someone’s voice, their accent or pronunciation. I have not yet found a voice or accent that bothers me but sometimes there are words which make me say “stop uttering that word!”

The most common reactions to a trigger sound are anger, rage, disgust, and discomfort. These sounds also cause anxiety, nervousness, sweating, and increased heartbeats.

After noticing the trigger sound, my first reaction is to find the source of that sound — the person munching on chips, for example. Then comes rage mixed with thoughts followed by the urge of finding the best way to avoid the discomforting sound. When leaving the place, wearing headphones etc. is not an option, you keep boiling inside and suffer.

Dealing with Misophonia Is A Big Deal

Imagine being at dinner table where everyone is enjoying their time while you are focusing at the chewing sound being made at the next table. Or being on a date where everything is going fine until you realise the other person makes sounds you can never make peace with. How about not being able to focus on studies, work, important discussions etc. because all you hear is those nasty sounds? Imagine rushing to the bathroom and try to catch your breath as you cry because you can’t handle sounds around you. Or being a person who is trying to act ‘normal’ while occupied with thoughts of rage and trying your best not to react.

People with misophonia face these situations at varying degrees. Dealing with such a condition is hard when the world around us is full of trigger sounds. Living with a condition little-understood, you grow up blaming yourself because something is wrong with you. Knowing that people around you can live in peace with these sounds while you are trying to cope with them is frustrating. You don’t know how to react when people claim that you are just making it up or say that they are also annoyed with people making chewing sounds because of their ‘lack of manners!’

A person facing such condition comes up with coping mechanism in efforts to deal with it. Wearing headphones and listening to music, using earplugs, leaving the place, isolating one’s self and avoiding going out, avoiding meeting people, trying to mimic or suppressing the sound by making other sound etc. are some of the ways to cope with misophonia.

When sharing about my misophonia with a friend recently, I realised that us mocking and making fun of my situation helps me. It’s also comforting being with someone who is aware of the condition. With their support, it becomes easy to avoid these situations because the person will say “let’s change our table,” rather than telling you to “deal with it.”

Living with Misophonia: Summing Up

The world around us is full of beautiful sounds. But for some people, it’s also full of discomforting noise. What could be a usual sound you can live peacefully with, could also be the cause of rage for someone. While you enjoy your meal in peace, the person next table could be boiling in fury because of the chewing sound you make. This is misophonia, a less-understood but highly discomforting condition that makes you hate certain sounds.

I have been living with misophonia since as long as I remember growing up. When I first became aware about my condition, there wasn’t much being talked about it. Although still not widely researched or discussed, misophonia is slowly receiving attention it needs. There are online forums where people share their experience and advice. Reading some of these experiences, I realised that my condition is not severe as many others. For instance, I have never felt the urge to flee the spot and cry in a corner. Some of these comments also suggest that you can’t have misophonia if you can handle trigger sounds. I disagree with this, believing the triggers, severity, and reactions vary among people.

While there are many sounds that cause me discomfort, annoyance or anger, there are plenty of sounds I appreciate and enjoy. There’s nothing like being in the nature, closing your eyes, and immersing in the sounds around you. Or listening to an orchestra where many instruments with distinct sounds come together to create a pleasant symphony. I also enjoy being in loud places like markets because of the ability to ignore the noise and focus on things like photography.

Do you think you have misophonia? Share with me how you experience it, deal with it, and live with it. Want to read more about misophonia? Use the following links.