pCloud Is Probably the Best Cloud Storage for Photographers 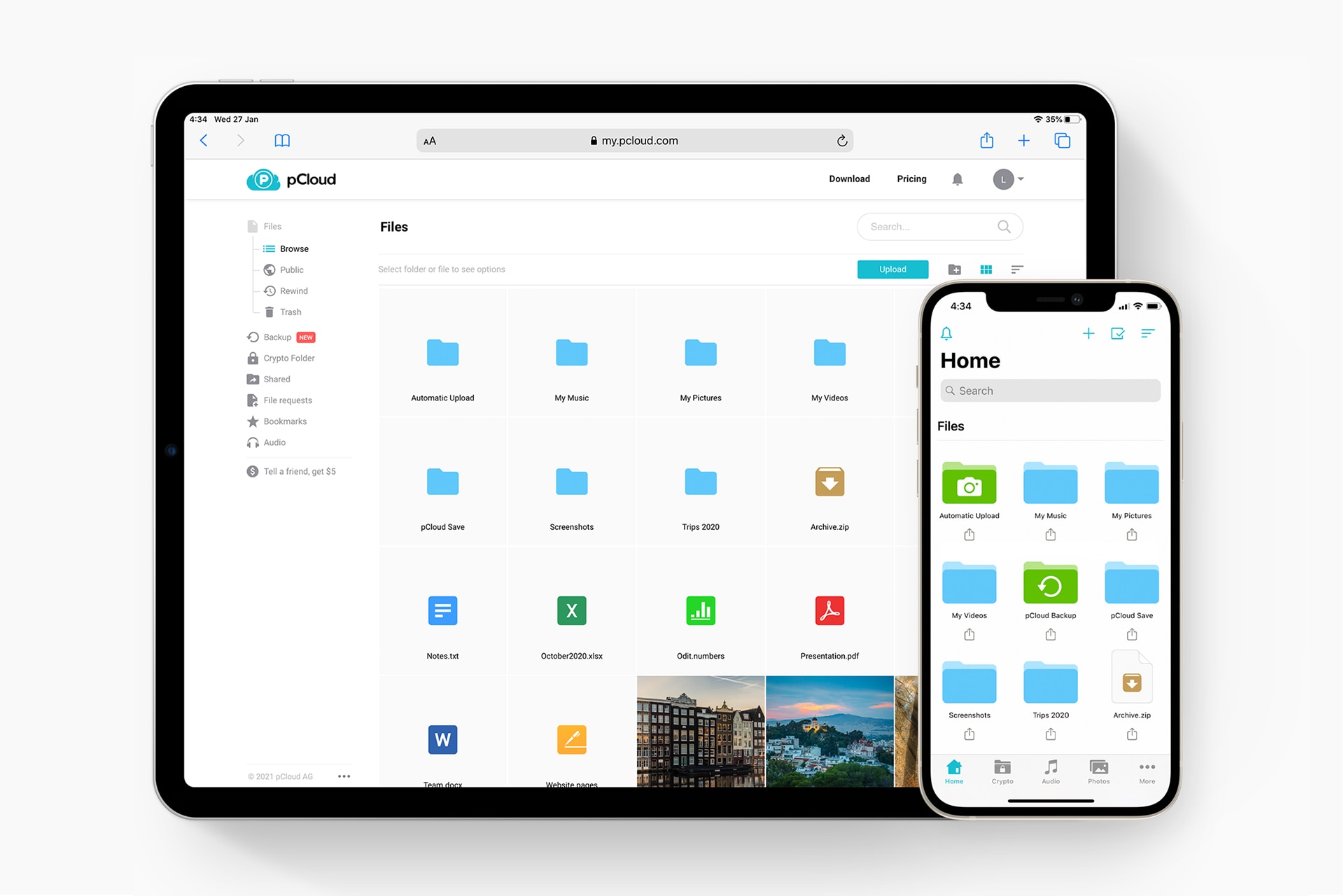 Long before I became a system administrator, I had learnt the importance of backup. I always keep and advice to keep at least two copies of data as the bare minimum backup strategy. An addition to this is having an off-site backup which I didn’t keep until a few months ago.

Leaving my life as a system administrator didn’t release me from the duty of taking care of huge amount of data. Stepping into the world of photography put me in possession of piles of digital pictures. While my ‘keep at least two copies’ strategy continued for about four years without an incident, the day finally came when I realised I needed a backup in another location, too. It was one of my external hard disks that gave up, leaving me with just one copy of my pictures, stress, and sweat on my forehead. I immediately ordered a new hard disk and started looking for a way to keep a third copy somewhere else.

Now, having some sort of bank locker isn’t an ideal way to keep my hard disk in a different location. I don’t have a place nearby either. That’s when I thought it was now a good idea to start paying for a cloud which would satisfy two goals: Having data in a second location and having almost immediate access to download/upload my photographs. Along with two copies on external hard disks, cloud storage was a neat and inexpensive solution that would keep me from future disasters.

Update: Although pCloud makes a great cloud storage, it’s limited in size. If you are a beginner, the 500GB or 2TB storage might make sense. But as I near the limit, I think Backblaze’s unlimited storage makes more sense. At $130 for two years (or $7 a month), Backblaze offers great value for money.

Searching for a Cloud

I have used free cloud services like Google Drive and Dropbox for a long time. When I started looking for a cloud to store my photography work, I had a few things in mind.

First, I didn’t want to spend too much money. Sounds odd, I know. I should be able to afford expensive services if my data is valuable, right? But I can’t and that’s a fact. In a way, I was okay spending not more than an external hard drive of the same size. A decent hard drive would last about five years before it will start giving me trouble and I will have to buy another one.

If I could find a cloud with lifetime plans, I was happy paying for it even if it was a bit more expensive than an external hard drive. With that decided, I had to find a provider that was reliable, was in business for considerable amount of time, and fulfilled my other requirements. I had no intention of choosing to pay for Google Drive, Dropbox etc. for various reasons including data privacy.

With popular cloud services out of question, I was left with a few options. In the end, I chose pCloud – a Switzerland-based cloud provider that I found while looking for a zero-knowledge cloud with end-to-end encryption.

Initially, I tested pCloud’s free plan that gives 10GB storage without restrictions. After testing its speed, connection reliability, and Android and Mac apps, I decided to give its paid plan a try.

Because I got rid of gigabytes of old photographs when I bought a new hard drive, I didn’t need more than 500GB space to begin with. pCloud plans start at $4.99 for 500GB which made sense for me financially.

With a month to try pCloud’s paid plan, I started uploading all my pictures via its Mac app. To check its speed, I uploaded and deleted my photographs three times. pCloud’s upload speed is impressive and there’s no restriction on file size, speed or bandwidth. Working with hundreds of gigabytes of pictures, I don’t want the cloud to be limiting my data transfers in any way – especially as a paid user. With pCloud, I didn’t need to worry about that but there are cloud services that put such restrictions.

While uploading my pictures was a hassle-free experience, browsing them using pCloud’s web interface as well as Android app was even better. Both are super quick to use and navigating between directories is as quick as doing it offline. One of the best things I like about pCloud’s mobile apps and web interface is that I can preview not only images, videos, and audio but also RAW files. If you click a lot of pictures on your phone, you will like pCloud’s auto upload option.

Searching for files or filtering them by file types happens almost instantly.

pCloud Drive – the desktop app that lets you mount your cloud storage to your computer left me surprised with similarly fast performance. Because I am virtually mounting my cloud storage, it does not take space on my computer. All files are available whenever I need, provided I have an internet connection. If I know I won’t be having internet for any reason, I can sync a directory offline and continue working on my images. When I have internet again, all changes are synchronised.

The virtually mounted storage can also be used as the location of my pictures in Lightroom or Capture One. Because these pictures are on the cloud, it takes some time before they are ready for edits but it’s good to have when I don’t have my external hard drives with me.

I use the sync feature to keep my hard drive synchronised with pCloud. Every time I come back with new photographs, I copy them to my first external hard drive which is synchronised with pCloud. This way, I have two copies of my pictures. I will then make sure to copy these pictures to another hard drive that gives me two identical hard drives as well as an off-site backup in cloud form. If you are not going to use pCloud files on more than one computers, you can use its new Backup feature instead. pCloud Backup copies all files from chosen directories instead of synchronising them between devices.

Photographers and other professionals will also like pCloud’s ‘branded links’ feature. When you share a directory – let’s say one with your client’s recent photo shoot – you can add a cover image, logo, and description to it. It might not be as customisable as having your own website but it’s still something your clients would like more than just a list of images.

Shared links can be password-protected and you can decide whether files can be downloaded from/new files can be uploaded to a shared directory. You can also set expiration to shared links. Moreover, you can invite others to collaborate on your files – making pCloud an all-in-one productivity tool.

pCloud also lets you create a public directory. Files uploaded here have direct links which you can use on your website. If you have limited space on your web host, you can upload your images in this ‘public’ folder and display it on your website without consuming space or bandwidth from your host. It can also be used when you want to share a quick screen shot with someone or post images on a forum.

For users who need extra layer of privacy for their data, pCloud offers a paid add-on called pCloud Crypto. If you have data that you are not willing to share with someone but need a place to safely back it up, pCloud Crypto can help you with that. pCloud Crypto is a separate space within your cloud storage and data stored in it is protected using an encryption key that only you know. Because it’s an end-to-end encrypted transfer, all files are encrypted before they leave your device (client-side encryption) and remain encrypted when they are stored on pCloud (encryption at rest). With clouds like Google Drive or Dropbox, you get encryption at rest but your data is not end-to-end encrypted.

I like pCloud Crypto being optional because I don’t necessarily need encrypted cloud storage so I don’t want to pay for it. If I have sensitive files to store on cloud, I can still use an open-source tool like Cryptomator to encrypt my files before uploading them.

To make your pCloud account more secure, you can use two-factor authentication.

pCloud lets users choose between Europe and U.S.A. as their data location. Both file versioning and recovery from trash are possible for 30 days. Trash history can be extended to up to 365 days with a paid add-on.

If paid yearly, pCloud’s 500GB plan costs $47.88. Choosing to pay monthly instead costs $4.99 per month. The 2TB plan costs $95.88 per year. If paid monthly, it costs $9.99. While monthly prices are good if you are just trying it out, pCloud’s lifetime plans offer great value for money.

By choosing to pay just once, you get the 500GB plan for $175 while the 2TB plan costs $350. For a quick comparison, a reliable, high-speed 2TB SSD costs $349. Hoping to use the same cloud for at least the next five years, I know I save money as compared to paying monthly or even yearly.

Even if a lifetime plan doesn’t suit you, pCloud’s monthly and yearly plans are still inexpensive as compared to other services. Tresorit, another Switzerland-based cloud provider, charges $10.42 per month for 500GB.

If you need more than 2TB space, you can contact pCloud and request more storage. For business users, pCloud offers business plans with multiple users. If you plan to share your cloud storage with family members or friends, you can opt for pCloud Family plan.

Of course, clouds have their disadvantages, too. You need an internet connection every time you need to backup or retrieve your pictures. The company can shut down or have a major incident like it happened with OVH Cloud recently. But cloud storage provides convenience without adding too much to your expenses. If you have not setup your backup properly, even offline methods will lead you to data loss.

Whether you should include cloud storage in your backup strategy is a personal choice. As a general preventative measure, it’s always good to have at least two copies in your possession and at least one copy off-site. I use pCloud as my off-site storage which allows me to quickly have access to my pictures. Even if I lost both of my hard drives, I will still have my data in cloud.

There are other cloud players like Icedrive that offer inexpensive encrypted storage. But I use pCloud for all the features mentioned above. After my four year old hard drive suddenly gave up, I wanted to make sure my pictures were backed up properly. Choosing to keep a copy in cloud gives me assurance I have access to my photographs even if I lost my hard drives.

Update: Although pCloud makes a great cloud storage, it’s limited in size. If you are a beginner, the 500GB or 2TB storage might make sense. But as I near the limit, I think Backblaze’s unlimited storage makes more sense. For $120 for two years, Backblaze offers great value for money.