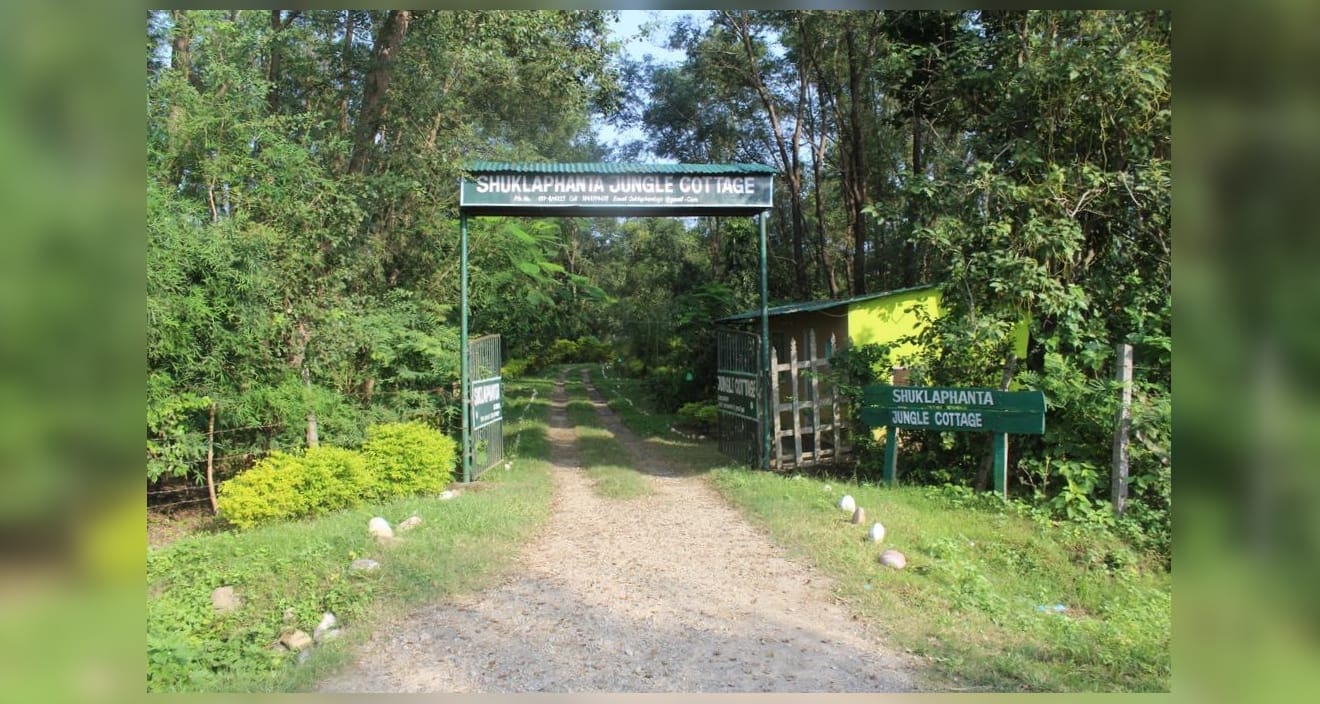 On my Nepal itinerary, I had put Shuklaphanta National Park as my first destination. I didn’t really want to visit the park itself, but I planned to spend a night there before I moved to Bardia. This is when I came to know about Shuklaphanta Jungle Cottage – the only place to stay near the national park I could find online.

After entering Nepal from India via Banbassa – Bhimdutta border, I reached Shuklaphanta Jungle Cottage a day earlier than planned. I ended up spending two nights instead of one and I also went on a jeep safari at the Shuklaphanta National Park which I didn’t initially plan.

Here’s my review of a two-nights stay at Shuklaphanta Jungle Cottage.

The cottage is located near the now non-operational Mahendranagar Airport around 6.5kms from Bhimdutta (Mahendranagar). From Bhimdutta, you can take a tuk-tuk ride to reach here.

The road near the place was under construction and it was a hell of a bumpy ride for me. I mean, tuk-tuks need to have better suspensions or something. I was the only one riding and the driver charged me 120 NPR for the ride.

Once I reached the place, I came to find it really quite and peaceful. The place was surrounded with trees and it had a garden full of different plants. The garden was well-maintained.

Different birds were chirping around, and some small monkeys paid a visit to the place, too. I also saw a monkey enjoying some leftover food from a dish that was left outside. I didn’t see him drink the beer, though.

Near the cottage is a small village and I could see locals moving in and out of the village mostly by walking or on a bicycle. Those people were friendly and almost all of them offered me a smile. It was really relaxing out there.

Around the place was a shop or two and nothing else. It was hard for me to find transportation to leave the place when I left in the morning. I walked for about 1.5kms to reach the main road where I found a ride to Bhimdutta.

The cottage is ideally located near the Shuklaphanta National Park – making it a perfect place to stay for guests who want to visit the park.

When I walked in from the main gate, I had quite a struggle to find some living person I could talk to. “Reception?” I asked when I saw two persons sitting and talking. One of them got up and greeted me with Namaste when I asked for the second time.

It was Bishnu, who also works there as a guide. The other one was the owner of the place, who wouldn’t even look at me or say anything like a simple hello. It stayed the same until later when I said I’m a blogger and I write about stuff.

During my stay, I was led to believe Bishnu was some sort of manager. On my last day, I came to know about the actual manager who did the check out formalities. He was right there all the time, but wouldn’t say a damn thing like “hello” or “welcome to our place.” Even while checking out, he didn’t care to ask whether I liked the place or not.

“That’s their style, maybe,” I thought.

During my stay, Bishnu was really helpful and was the only point of contact for everything. During the jungle safari, too, he was enthusiastic enough to convince me he was a good guide.

I had booked the place via Booking.com. When I reached the place, Bishnu showed me the room I had booked and then another room where I actually stayed.

The room I booked had nothing but two beds lying around where staff members slept at night. The room wasn’t in a pleasant condition when I had a look at it.

The room I stayed in was a little costlier than the one I booked, costing me $15 per night. It had two separate beds, and I asked them to be combined.

My room had an attached bathroom. It had a small soap and a pouch of shampoo. A shower was also present. I’m not sure about hot water, but there were two taps and they probably had cold and hot water running.

The fan in my room was in such a position that it wouldn’t blow air towards my upper body. I’m not sure if it was my bed or the fan, but their position quite didn’t work to keep me from sweating at night. By the way, there were other rooms with an AC, too.

A mosquito net is a must-have in Nepal. My room didn’t have one. If you’re traveling to Nepal, always carry a mosquito repellent with you to avoid being bitten by those tiny devils – even if your room includes a net.

Nepal has an electricity problem in most parts. Shuklaphanta Jungle Cottage had a generator and every time the power would go off, someone would run to start the generator. They made sure the place had power almost all the time. I would consider it a nice gesture.

They had a big dining area, but it had only one small, working CFL bulb. I can’t really say whether it was intentional to keep insects way but it was hard to eat with almost no light.

Their other services include a jungle safari, car rental and probably pickup and drop off service, too.

The area outside the cottages was nicely cleaned. The garden was properly maintained, too.

The room I was shown first was not in good condition and it sure needed to be properly cleaned before someone could stay there.

The room I stayed in was cleaned but it wasn’t clean. My room was fully carpeted, but the carpet had dirt. There was plenty of lizard (and probably other creatures’) poop under the beds. 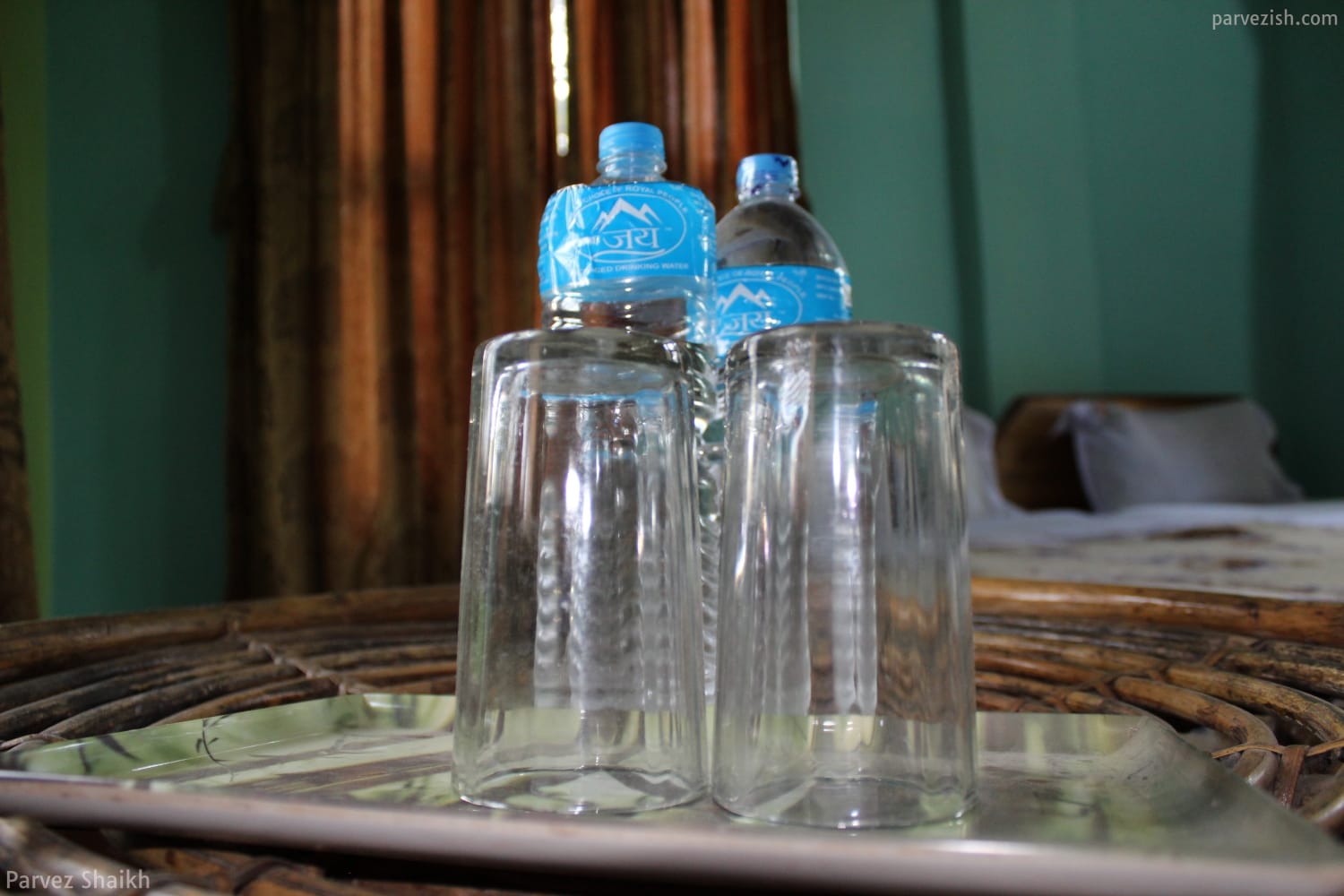 There was a table on which there were two glasses and a tray – all of them had dust on them.

The bathroom looked clean. It was full of small insects – many of which were cockroaches, including dead ones, however. They would keep roaming around me while I would be showering or pooping. They kept me company, I guess.

Upon complaining about cleanliness issues at checkout, the manager deducted 30 NPR (yes, 30!) from my final bill! Is that even a dollar?

For my first night’s dinner, I asked them to cook a chicken gravy with some chapati. They served me my order along with other food items which I didn’t order. It was a whole Nepali thali which included two (or three?) vegetable dishes, a chutney, and some salad. As I didn’t order it, I didn’t eat anything from it.

While checking out, the manager wasn’t aware of this and he charged me for my chicken dish as well as other dishes. I had to bring to his notice that neither I ordered nor I consumed it.

Anyways, the chicken dish was well-cooked and tasty. The chapati was good, too.

During my jeep safari at Shuklaphanta National Park the next day, they simply packed us some fried rice, a small pack of fruit juice (worth 18 NPR), and bottles of water. For breakfast, we had a cup of tea with some biscuits. That’s all.

On the second night, I was served two different dishes with chapatis. Both dishes tasted like home-made food and I enjoyed my dinner, again in almost no light.

Overall taste and quality of food were good. I don’t have any complaints here.

Overall, my stay with Shuklaphanta Jungle Cottage was good enough for two nights. During my stay, I slept with different insects, bathe and pooped with cockroaches, and ignored some dirtiness. But summing it all up, my stay was worth the money paid.

I also had some nice food, except during the safari. I mean seriously, just a plate of rice?

On the improvement side, the rooms need more cleanliness. The owner and manager need to be more welcoming to their guests. They also need to improve their food they serve during the jungle safari.

Will I stay again at Shuklaphanta Jungle Cottage in Nepal? It’s hard to say but it would be a yes, almost. Should YOU stay there? Well, yes, if you really wish to do a jungle safari at the park. You don’t have many options to choose from, anyway.

Overall, Shuklaphanta Jungle Cottage, Nepal is a nice place to stay if you wish to add Shuklaphanta National Park to your itinerary.