11 Interesting Facts About the Kingdom of Bhutan

I have said it before and I would like to say it again: Bhutan is one of the most interesting countries I have visited so far. With its difficult but beautiful landscape, a culture that is deeply rooted in people’s daily lives, and food that is deliciously spicy, this small landlocked country continuously amazed me every day I spent there.

My love affair with the Kingdom of Bhutan began with the very first look at the beautiful valley of Paro from my plane’s window. As I travelled across those curvy roads for the next few days, I observed more of its beauty and understood its culture better.

Be it receiving help from strangers, spending a couple of days at a farmhouse, being invited to have lunch with monks or spending a day at a temple, my journey into Bhutan gave me everything I usually expect from a new place.

Now that my journey has come to an end, I wanted to share a few facts about this beautiful country. These facts are based on my experience and focuses on things I love the most about the Kingdom. I am sure you will love to learn some of these interesting facts about Bhutan.

1. The Happiness Index and Growing Number of Suicides

The 4th King of Bhutan, King Jigme Singye Wangchuck, coined the term ‘Gross National Happiness’ in 1972. Since then, the concept of happiness continues to influence the governance of the country. Bhutan’s policies focus more on GNH than GDP and pays attention to the collective happiness and well-being of citizens.

The idea of this happiness index – although inspiring – is met with criticism not only from outside of Bhutan but from inside, too. A few Bhutanese youngsters I met during my trip told me they were not satisfied with this idea of living. Unable to cope with depression, anxiety and other mental disorders, the country’s youth is attracted towards drugs and alcohol abuse.

At the same time, Bhutan is also struggling with growing rate of suicide. According to 2011 data, Bhutan had the 20th-highest suicide rate in the world. In the Asia-Pacific region, the country ranked 6th. Using the terms like ‘suicide’ is considered as taboo in Bhutanese society and adds fuel to an already worsening issue. To tackle this growing rate of suicides, Bhutan unveiled a three-year ‘suicide prevention plan’ in 2015.

I did not believe when a fellow traveller told me about increased suicides in Bhutan. “How could it be possible? They are the land of happiness,” was my reaction. Turns out, she (the fellow traveller) was right.

2. Paro: One of the Most Difficult Airports

Paro International Airport is one of the most difficult airports to fly to. Look outside your aeroplane’s window as it approaches the runway and you should notice how difficult this landing could be. Being a difficult airport and given the fact that a limited number of flights arrive and depart from Paro, a small number of pilots are certified to land here. 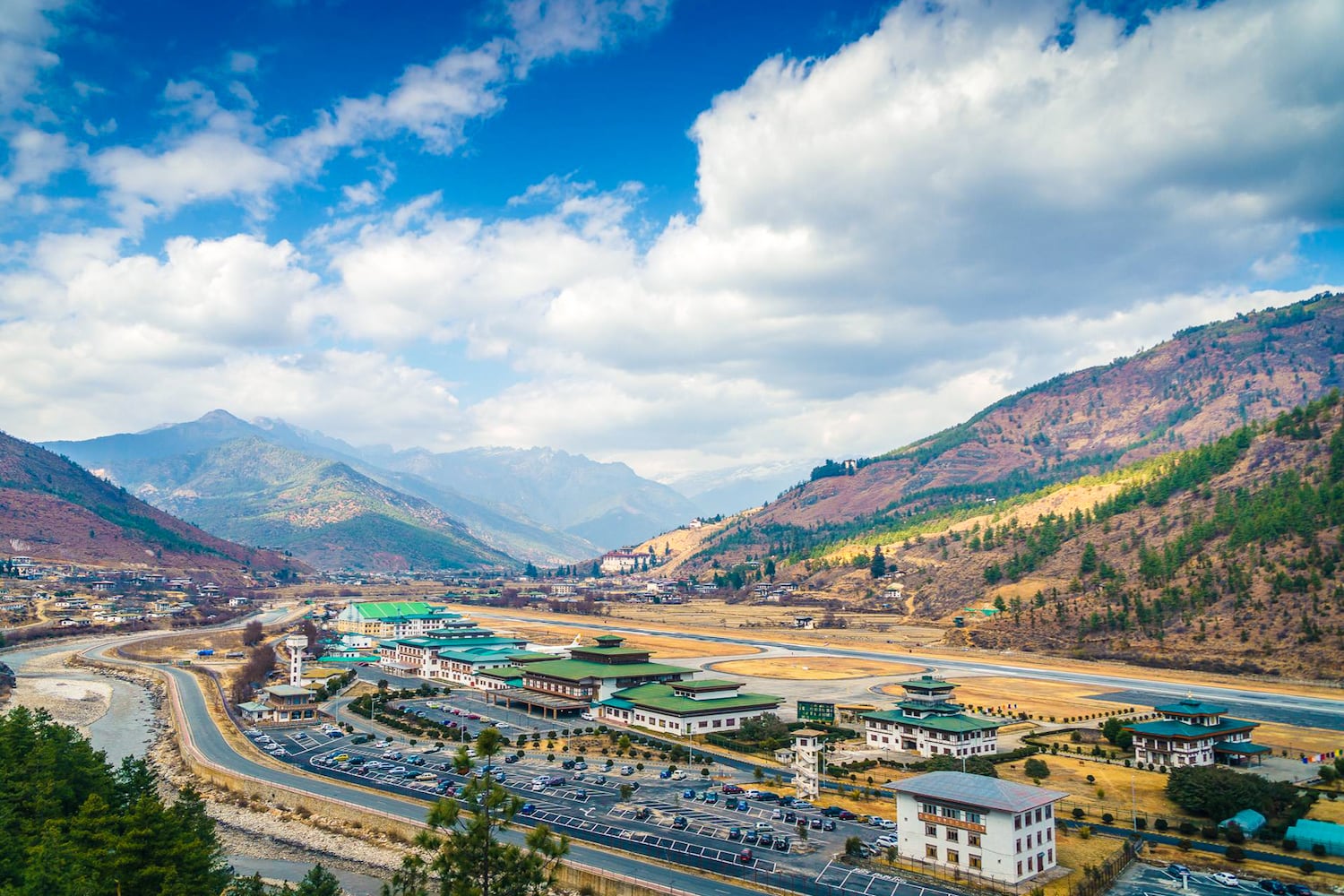 This being Bhutan’s only international airport, your journey will usually begin and end in Paro. If you would like to enjoy the bird’s eyes view of a landing, you can visit a designated place near the airport.

It’s common for Bhutanese babies to go without a name for a while. Babies are not named immediately after their birth – even for weeks. Bhutanese parents – often travelling a long distance – visit a lama or a monk who names the baby. It is believed that a powerful name chosen by the lama would protect the child.

The first thing I came to know about names in Bhutan was that there are no last names. It is also common for a person to have two names forming a single name – none of them being a family name. One example would be Yangzom Namgay – whom I met at Tshering Farmhouse in Paro. She told me that people can call her by both names – either Yangzom or Namgay.

Another interesting thing about Bhutanese names is that people can have exactly the same name – even in the same family. In addition, males and females can have the same name, too. Namgay’s brother, for instance, is also named Namgay. Another example would be ‘Sonam’ who can be a male or a female. There are a few exceptions, however. Some names like Choeden, Karzi, Wangmo, Deki, or Kiba, can only be given to a girl child.

Bhutanese babies are given a name from the list of common names. Namgay, Sonam, Tashi, Tenzin, Tshering, Dorji, Pema, Sangay, and Thinley are some of the very common names you will hear in Bhutan. Not only babies but even shops and businesses are given a name out of this list. Visit a market and have a look around. You will find shops with similar names everywhere.

Bhutan used to be isolated from the rest of the world until 1974 when the government opened the country to foreigners. Less than 300 tourists visited Bhutan during the first year. This number is slowly increasing, however, and Bhutan welcomed 2,09,570 visitors in 2016.

Bhutan’s government and citizens take utmost care of their cultural values. Bhutan has established the policy of ‘High Value, Low Impact’ tourism. This policy ensures that only the most discerning visitors who can respect Bhutan’s culture, traditions, and environment visit the country.

Current tourism fee to visit Bhutan is $250 during season and $200 off-season – per day. This fee includes your accommodation, transportation, and food. Tourists from India, Bangladesh, and the Maldives do not have to pay this fee.

The permission and visa to enter Bhutan entitle you to visit Paro and Thimphu only. A special permit is required to visit other parts of Bhutan. This policy is in effect to protect the Bhutanese culture and heritage.

A large amount of Bhutan’s income is spent to provide citizens free education and healthcare. With the government spending a considerable amount on the well-being of people, it isn’t surprising to learn that Bhutan has a very low crime rate. Keeping faith in the idea of Gross National Happiness instead of GDP, most Bhutanese are happy with the life they are living.

Cases of petty crimes like pickpocketing are reported occasionally, while violent crimes are rare in Bhutan. In recent years, however, cases of drug-related crimes have increased within the country. The introduction of television – often regarded as incompatible with the Bhutanese culture – is believed to have fuelled the crime rate among the young ones.

6. Bhutan is the World’s Only Carbon Negative Country

Bhutan’s pursuit of happiness does not focus solely on people’s well-being. The Gross National Happiness index includes preservation of Bhutan’s environment, too.

With the government’s continued efforts, the Himalayan Kingdom takes pride in being the world’s first carbon negative country. With over 70% of the country still forested, the country has become a ‘carbon sink’ thanks to its massive tree cover. To protect this cover, Bhutan’s constitution was amended to make sure its forest area would not drop below 60%.

7. Delicious Food and All that Spiciness

People of Bhutan love spicy food. Every dish you will eat in Bhutan will include excessive spiciness. If a dish itself is not made spicy, a spicy sauce will be served along. Be it plain rice or momos or the famous ema datshi – everything is supposed to be extra spicy.

The notable spiciness aside, Bhutanese cuisine is something you should definitely treat yourself with. Dishes like ema datshi, jasha maru (spicy chicken), shakam paa, and shamu datshi are a pleasure to eat. Just ask the cook to make your food less spicy if you can’t handle all those chillies.

8. The Secret Behind People’s Red Lips

“Why do so many people have visibly red lips here?” “What’s that weird smell?” These are the two questions that popped in my mind when I reached the Paro town.

It wasn’t long before I realised the secret behind those red lips. People of Bhutan love chewing Doma Pani aka areca nut and betel leaf. It is common for people to greet you with doma pani but no one seems to know how it became so popular in Bhutan’s culture.

You will find splotches of ‘paan’ and tobacco decorating the walls and roads almost everywhere in India. In India’s tiny neighbour, people often spit their ‘doma pani’ in dustbins or other designated areas.

9. Ban on Tobacco, No Smoking in Public

Out of many things I loved about Bhutan is the country’s ban on tobacco and smoking in public. While people can freely enjoy their doma pani, they can’t sell or publicly consume tobacco products. Bhutan has one of the strictest anti-tobacco laws in place and it’s prohibited to sell or distribute tobacco items within the country.

Surprisingly enough, the consumption of tobacco items itself is not illegal in Bhutan. The anti-tobacco laws focus primarily on cigarettes and that too, when smoked in public places. Under-the-table sales and smuggling of cigarettes are common in the Kingdom and you will have to pay a hefty price for a pack of cigarettes, of course.

10. Polygamy Is Allowed in Bhutan

An act of polygamy is not illegal as per Bhutanese laws. A Bhutanese man can marry another woman (or many women) with the consent of his wife. A woman, too, can legally marry more than one man.

Although polygamy is not illegal, it is a declining practice in Bhutanese society. Dealing with one spouse could be a task on its own. So it’s easy to imagine why someone would not prefer more than one partner.

Tibetan Buddhism is the dominant religion in Bhutan followed by Hinduism. Other religions also exist in the Kingdom in very small numbers.

Preserving their religion, culture, and traditions is something people of Bhutan do with utmost dedication. But this doesn’t stop others from following their faith. Bhutan’s constitution allows freedom of religion and the Druk Gyalpo (the king) is considered as the protector of all religions.

Proselytising is a prohibited act, however.

Intersting Facts About Bhutan: Summing Up

The small landlocked country of Bhutan has an interesting blend of religion, culture, traditions, beliefs, and laws. Be it the concept of happiness, efforts to protect their culture and environment, low crime rate, or that excessive spiciness in their food, Bhutan has things that will keep you amazed.

These interesting facts about the Himalayan Kingdom only prove that a visit to Bhutan is surely an exciting experience to own. A $250 per day fee to visit Bhutan may not sound very ‘affordable’ to many but even a short visit to Bhutan shall reward you with some unforgettable memories.

That’s all, folks. This was Parvez and you were reading some interesting facts about Bhutan. I hope you found this article informative and I would like to thank you for reading. If you liked this article, please share it with others.

What do you think about Bhutan? Have you already visited it? Are you planning to visit it? Do share your thoughts with me.