When Locals of Kampung Ketek, Malacca Invited Me to Dinner 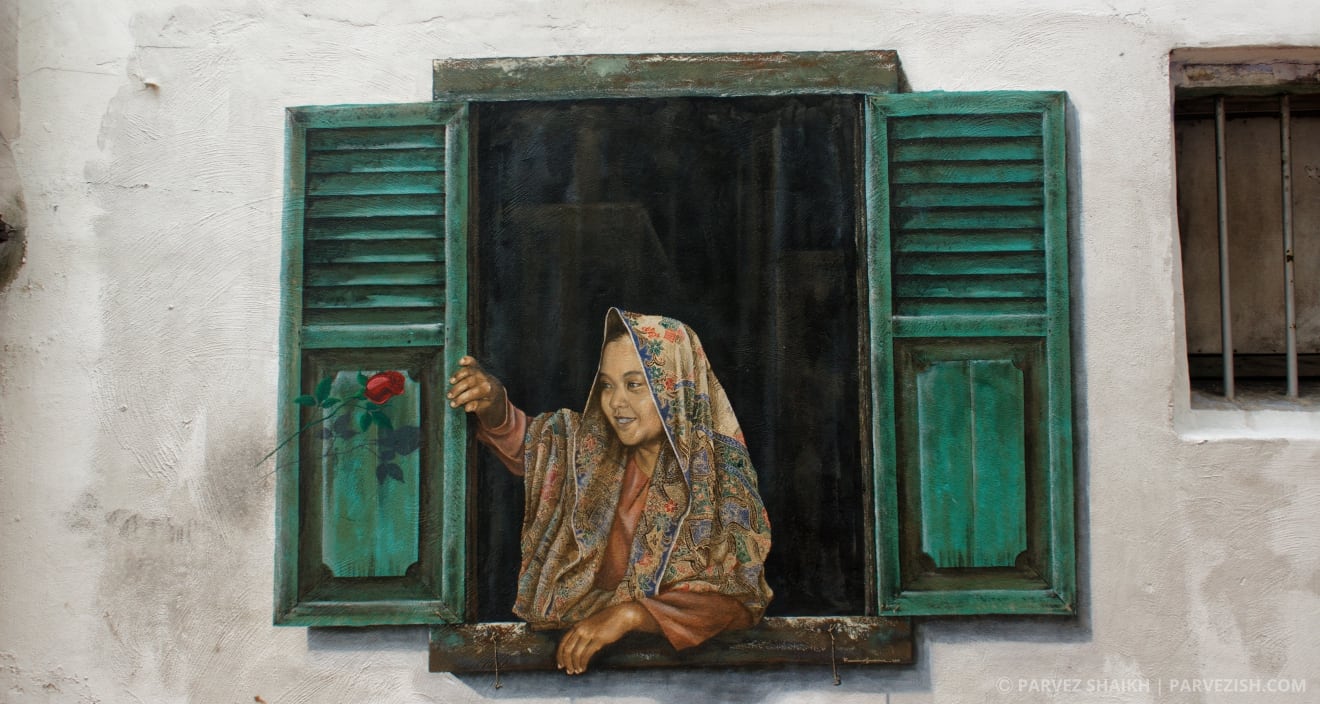 After deciding to visit Malaysia during the month of Ramadan, I celebrated Eid Al-Fitr, locally known as Hari Raya, at Masjid Jamek in Kuala Lumpur. After celebrating Hari Raya, I decided to leave for Malacca (or Melaka) two days later.

It was probably a decision taken without much of a thinking. First, I did not book my bus ticket online. I thought I could just visit the TBS bus terminal (Terminal Bersepadu Selatan) and easily get the next bus. Second, it was the weekend of Hari Raya holidays when flocks of locals leave cities like Kuala Lumpur to visit popular holiday destinations like Malacca.

When I reached TBS, I was surprised to see hundreds of passengers waiting in long queues to get their tickets. When my turn finally came after nearly one hour, I could only get a bus that departed three hours later. I spent my time doing nothing at the bus terminal until my bus finally left.

It was a short journey of two and a half hour to Malacca Sentral, from where I got a taxi to my hostel. It was the usual hot day in Malacca and I was tired. I took a nap and went to Jonker Walk around sunset. It was a Saturday, that too during a holiday. So Joker Walk was full of people – locals, tourists, and visitors from nearby cities celebrating Hari Raya.

There were a lot of street food offerings, but for some reason, nothing at the Jonker Walk could catch my attention. I kept walking back and forth until I gave up and decided to visit nearby temples first. I saw some kids playing near the Xiang Lin Si Temple and decided to enter the neighbourhood. It was a Kampung (village) – named Kampung Ketek – where I saw some people sitting outside a house. What happened next was a wonderful example of people’s generosity and hospitality.

“As-salamu Alaykum,” I greeted the men sitting there as I walked inside the neighbourhood, and introduced myself. “Can I join you?” I asked. They were not good with English but I’m sure they understood what tried to tell them.

I could see a smile on everyone’s face as I walked in. They got up from their chairs, greeted me back, and shook my hand. They offered me a chair and asked me to sit with them. I joined them as they smoked their cigarettes and talked to each other. I sat there for a while trying to understand their conversation. A few minutes later, a man offered me a cup of coffee.

I sipped the Malaysian coffee as I observed the surrounding. There were wooden houses around, built in Malaccan-style architecture. There were some kids playing around while some of them were busy pampering kittens. Inside the house were women who were sitting there talking. I could see some Hari Raya decorations around the place.

Kampung Ketek – previously known as Kampung Masjid and Kampung Pali – is known is the birthplace of Abdullah Abdul Kadir, commonly known as Munshi Abdullah. Born in 1796, Munshi Abdullah is regarded as the ‘father of modern Malay literature’ and his house is still present in the village. Located in the UNESCO World Heritage Zone, Kampung Ketek is believed to be one of the oldest villages recorded since the Dutch era in Malacca.

Away from the crowd and its noise just a few hundred steps at Jonker Walk, I felt a sense of calmness in this neighbourhood. A few minutes later, I got up and asked a man if I could take some photos around. “Yes, sure,” the man replied with a smile. This man – the host – is referred to simply as “the man” later in this article. Apparently, we never asked each other’s names.

As I was clicking pictures, I noticed some men getting up and discussing something. A few moments later, I heard a voice asking me “Would you like to join us for dinner?” I turned around and saw a lady standing near a door asking me this with a hand gesture suggesting “eating.”

I paused for a moment before responding and looked at those men for a hint. “It’s okay,” one of those men told me. “Come, join us.” The lady was still awaiting an answer from me. “Would you like to eat?” She asked again. “Yes,” I said nodding my head. 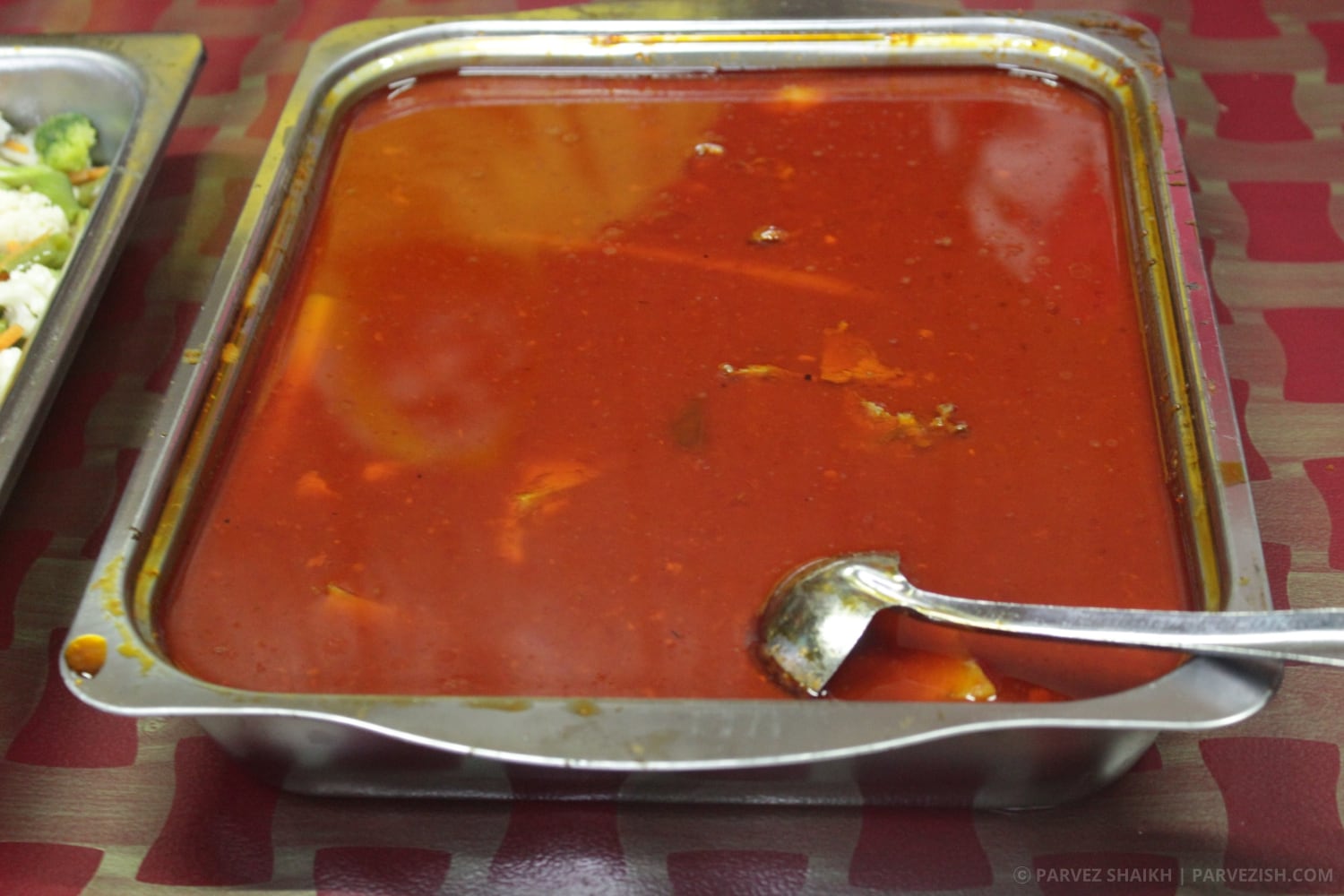 They led me to a room where people were sitting on the wooden floor. Besides the men whom I met outside were two ladies and a young guy. “English,” a man pointed at that young man suggesting he could speak English. I sat down beside that guy and he welcomed me.

We spoke for a while as he asked me about my work. Then I asked him if it was an ‘open house’ dinner for Hari Raya.

An open house ceremony is a common way of celebrating festivals in Malaysia where houses are open for everyone. House owners welcome people regardless of their religion or race and they often dine together.

“No, it’s a family dinner,” he replied. This meant a lot to me as not I felt more welcomed than I had felt before.

A few minutes later, food was brought to the room. A plate of rice was served to me. In the centre of the room were different trays – one with chicken gravy, one with fish, and one with salad. One by one, everyone took some food. I took some chicken gravy and salad.

As I had the mouthful of rice mixed with gravy, it instantly reminded me of home. The men and women continued their conversation as I looked around the room and enjoyed the food. There were big windows – one behind me and one on my left. In my front hanged a large frame of a photo of Macca. It was a typical Muslim house – same as you would often see in India as well. There was a door that led to another room where the elderly lady was sitting along with other family members.

Once my plate was empty, the man asked me to have some more rice. I hesitated at first, but he insisted, and I was served some rice again. A few minutes later, everyone in the room was done with the dinner. Plates were taken away and we were presented with some water to wash our hands.

After the dinner, everyone sat there for a while talking. The guy beside me was busy with his phone and I just sat there observing. It didn’t feel quite right to get up and leave.

After some time, they got up one by one and it looked like some of them were leaving. I wasn’t sure who was staying and who was leaving yet. I also got up and they led me outside. We clicked some pictures of us together and relatives left one by one.

“Okay, boss,” The man told me. “Good to see you. Come again.” I said I would and we shook hands and shared a hug. The man disappeared as I clicked some pictures of the kids playing nearby. Before leaving, I met the elderly woman and thanked her for having me for dinner. “Selamat Hari Raya Aidilfitri,” I greeted the lady and other females inside the room. They greeted me back and I left the place.

As I left the Kampung, I had a big smile – the smile of satisfaction – on my face. I looked back before reaching the street. I couldn’t see anyone anymore. I walked back to the still-crowded Jonker Walk where people were busy enjoying the street food. I walked through the crowd with a smile that was still resting on my face.

It was my first day in Malacca. It was a usual hot day in the town when I reached there. When I walked to Jonker Street searching for some food, nothing caught my attention. Probably because some nice home-cooked dinner was waiting for me just at the end of the street. I just had to follow my intuitions.

When I reached the end of Jonker Walk, I saw Kampung Ketek where some men were sitting outside a house. They welcome me with a smile and after a few minutes, I was asked by a lady if I wanted to join for dinner. Although hesitant at first, I joined the family and their relatives for the dinner.

The men who welcomed me to the neighbourhood didn’t speak English very well. There was the barrier of language between us. But as I had experienced in Bangkok, you don’t have to speak the same language when you know the language of humanity, kindness, and love.

The hospitality of locals in Malacca reminded me of my first day in Bhutan. Moreover, it also reminded me of my experience of dining with Buddhist monks – again in Bhutan. Such experiences are what really make me happy while making my journey worthwhile. They keep me encouraged to travel more and to seek more of such pure human encounters. I am thankful to those lovely locals in Malacca and elsewhere who made my journey more memorable.

What about you? I’m sure you too had some similar experiences during your travels. Do share them with me! Did you like this article? Please share it with others.

Thinking of visiting Melacca? There are some nice hostels and cosy hotels across the town. You might want to book your room before reaching there.

Cover Image: One of the street arts in Malacca, Malaysia.