Observing Rice Plantation in Nepal During the Pandemic 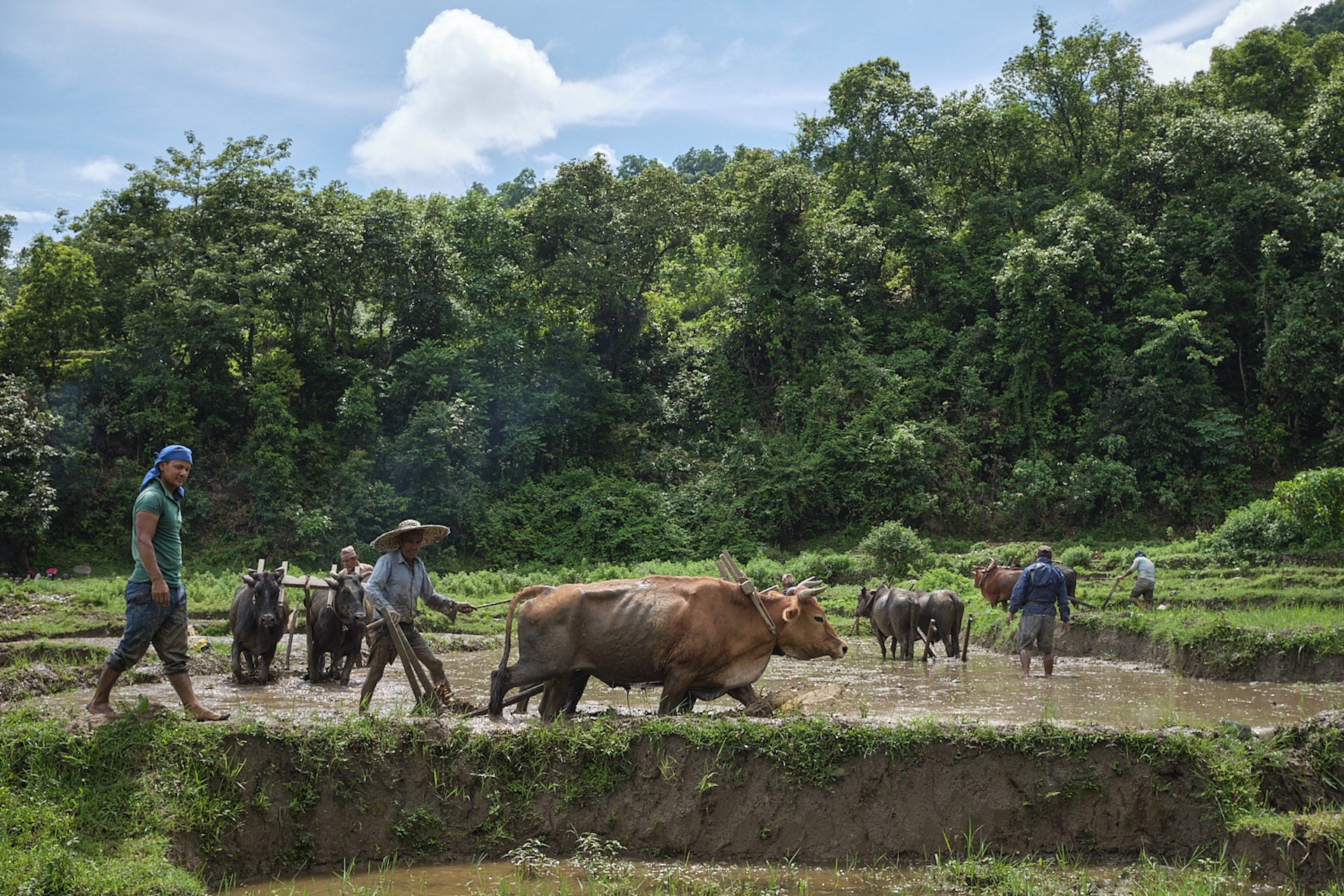 After spending eight months in Nepal last year, I came back in April this year. Nepal was under four months of complete lockdown in 2020. By the time I left in November, the situation seemed to be getting better. Businesses were allowed to open, tourists were welcomed once again, and overall there was an atmosphere of life ‘getting back on track.’

Things were, however, not back on track. By the time I reached Nepal this year, the virus was causing devastation back in India. Lockdowns were imposed once again by state governments across the country. Within two weeks, most of Nepal was also put under lockdown.

After the gradual relaxation of prohibitory orders in Nepal allowing the movement of people after nearly two months, we decided to pay a visit to Begnas lake. We planned a short weekend visit and drove there on scooters. On our way, we saw corn being harvested and fields being ploughed for rice planting.

On the second day, we were riding through the valley and stopped at a lake. Walking around, we noticed people in colourful clothes working in a distant rice field. When we reached the field walking through muddy rice paddies, the farmers invited us to join them. For the rest of the day, we planted some rice, ate and drank, and shared moments of joy with the farmers.

About Ropain – The Rice Planting Festival of Nepal

Celebrated every year on the 15th day of Nepali month Ashar or Asar, Ropain means ‘rice planting.’ Ropain is one of Nepal’s most important festivals and it marks the beginning of the rice planting season that continues for the rest of the month. The government of Nepal recognises Asar 15th as the National Paddy Day.

Due to the COVID-19 pandemic, large gatherings and celebrations were not allowed to take place in Nepal. Across the countryside in Begnas, farmers were seen planting rice by themselves and visitors were hardly seen. Being welcomed to the rice field felt like an invitation to be a special part of Ropain this year.

A woman washes up dishes before serving lunch
A woman serving tea at a rice field in Nepal
Women during a tea break
Women planting rice at a field in Begnas, Nepal

Men were busy ploughing the fields with bullocks. By the time a paddy was ploughed, women planted rice saplings in other paddies. The speed at which those women can plant rice is astonishing. Some kids were playing in mud nearby. A woman was in-charge of making tea and food for everyone and another was distributing drinking water.

When the tea was ready, the woman called everyone up. This gave us some time to chat with each other. After having tea, it was time for farmers to return to work while a woman started preparing for lunch. We walked around the rice field, taking pictures and occasionally chatting with farmers. What began as a cloudy, drizzling day had turned into a bright sunny day. Least we cared — we were enjoying our time.

When the lunch was ready, we were served first. Farmers joined us one by one after washing up in a stream. “I hope you enjoy our ropain festival meal (रोपाईं मेला को खाना),” said the woman who served us, with a smile. “It’s delicious” was all I could say as I enjoyed the daal bhat (lentils and rice) cooked on wood fire. I am sure it was visible in my smile how delicious the meal was.

After the lunch, farmers sat there chatting and enjoying home-made liquor known as raksi. Some of them turned their attention to us, asking us if we liked the food and were enjoying our time. Our time was being spent with joy, of course.

As farmers started going back to work, we asked for leave from Jagat. “Come and stay at my home tonight. You can leave tomorrow,” he said, pointing to a house up in a hill nearby. “I wish I could,” I said. “May be next time.”

Before we left, some of the farmers posed for a group picture. I thanked Jagat for having us and showing us the great hospitality that we had experienced. “Don’t thank me,” he replied. “It’s God’s will that you are here and we are happy to have you. Do come back.” His response left me speechless. He gave me his phone number before leaving and asked me to call him whenever I came back to Begnas. “I will,” I said as everyone waved us goodbye.

Celebration of Ropain has been restricted for the last two years due to COVID-19 pandemic. It was a privilege to be invited to a rice field and spend the day observing farmers and chatting with them, sharing a glass of tea and a delicious meal.

As we started walking through the rice paddies, I looked back at the day. It was our curiosity that led us to the rice fields and what kept us there for the rest of the day was the warm hospitality. Jagat and other farmers not only welcomed us with a smile, they made sure we were taken good care of.

I was also thinking about attending Ropain festival for the first time and how I couldn’t speak more than a few words of Nepali language. Four years later, I can speak enough Nepali to have a meaningful dialogue. I can mix more with the people, talk about things I wouldn’t be able to otherwise, and get to know people more. Knowing one more language has opened up a whole new window that leads me closer to people of Nepal. Last time, Ropain was a festival with hundreds of people. This time, it felt more personal and being able to speak some Nepali gave me an opportunity to experience Ropain differently.

When I left Nepal last year after spending the first eight months of the pandemic, I had not imagined I will be coming back anytime soon. But I think places often call you — making provisions for you to go there when you expect it the least. Coming back to Nepal every year since 2017 and being able to experience a day like this is an example that makes me continue to believe that.