A Night At a Cheap Roadside Hotel in Kathmandu 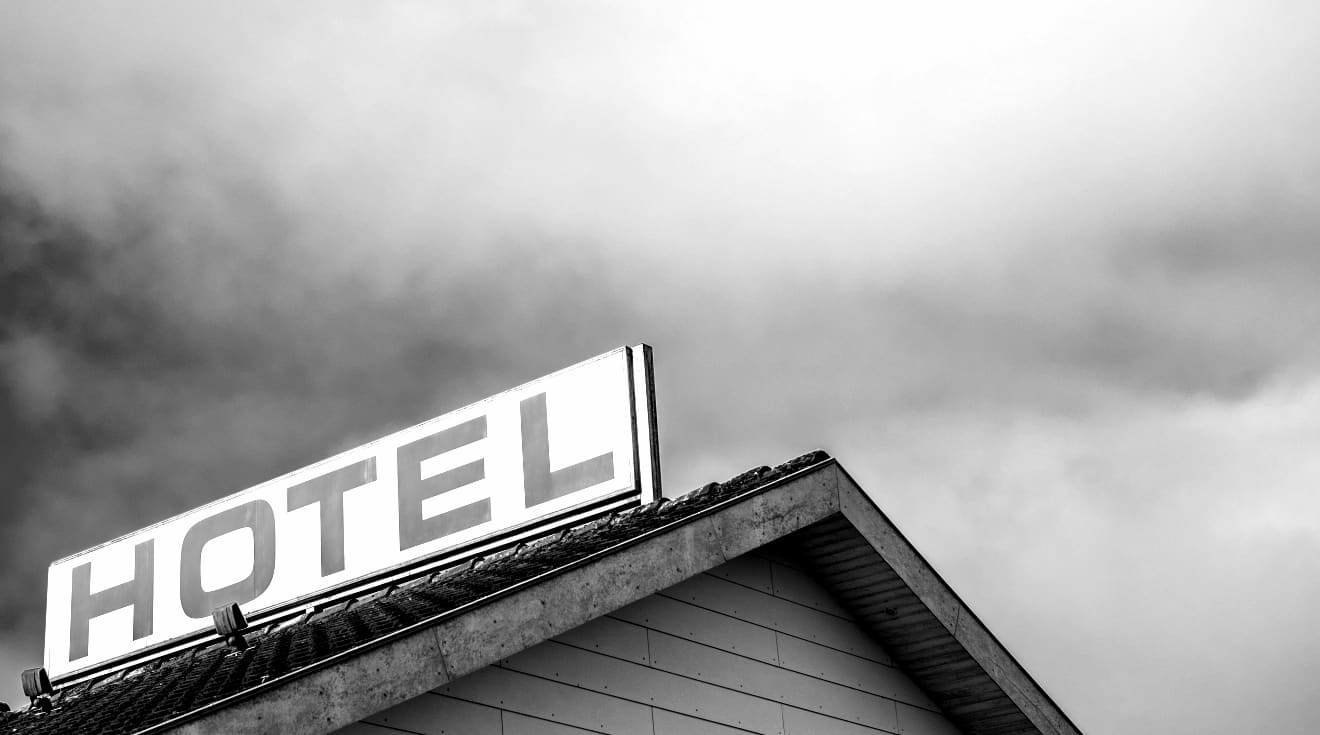 After a bus ride from Pokhara that lasted almost 15 hours due to a landslide, I reached Kathmandu in the middle of the night.

As I crossed the road in the dark, I heard a guy asking me if I was looking for a room. Following my instincts, I decided to trust the guy. “Let’s check out your room,” I told the guy and he asked me to follow him.

As I began following the lead of this stranger, I briefly looked back and found almost no one left near the bus station. Just a car or two were passing by.

The guy entered a narrow street, making sure I was following him. I was maintaining a safe distance from him to make a run if needed. After a minute, we reached the hotel.

It was completely dark around the hotel. I saw a small traditional orange bulb near the place barely enlightening the whole street. The guy asked me to enter the hotel as he went to the counter to grab the guest book.

As I entered the place, I saw four guys sitting at a table – eating and drinking. A guy from the group looked at me and started talking.

“Don’t worry. You are our guest,” a shirtless guy told me. “Come, sit and have a drink with us,” said another.

“Am, I don’t drink,” I said much to their surprise.

When I didn’t join them at the table, the shirtless guy walked towards me, offered a handshake and said something I didn’t understand. He was completely drunk, I could easily figure.

When a handshake didn’t satisfy him, he moved even closer and started hugging me. I didn’t mind at first but he was smelling awful and I moved back after a moment.

“You don’t drink, but you can buy us some drinks, right?” He asked me. “I don’t have money. I don’t buy drinks for others, anyway,” I replied. He gave me a surprised look and moved towards me to hug me again.

A drunk, shirtless guy wanting to hug me in the middle of the night – amazing. I took a step back and saw the young boy who brought me to the hotel asking me to ignore them and follow him to my room.

It was the middle of the night. I was tired after that 15-hour bus ride and there were some drunk guys who wouldn’t stop talking to me. “Really have to go,” I told them and I followed the young boy.

The boy led me through the stairs in dark. After we climbed a few steps, we reached my room.

He tried to unlock the small lock on the door but failed. After failing for a couple of time, he forcefully pulled the lock with his hands to unlock it. That didn’t work either. He asked me to wait there as he went down and brought another key.

This time he was able to unlock it in just two attempts. Impressive.

He opened the door and we enter the room. “Ugh!” I remember exclaiming in disgust as soon as I entered the room. The room was smelling awful. “We need maintenance,” the walls were screaming.

The mattress on the bed was so thin, it was barely there while the pillow felt ‘broken’ from the inside. That smell coming out of the bed was a bonus.

He asked me to fill my details in the guest information book and asked for money. “Am I not supposed to give it when I check out?” I asked him.

“No, the room charge is in advance,” he replied.

I gave him a thousand rupee bill and asked for change. He didn’t have any. He asked me to collect my change in the morning and left the room.

I closed the door as he left. There were no working electric plugs to charge anything. A tiny, hard-working bulb was burning in a corner trying its best to light the room. A fan was slowly circling above my head while making some spooky sound.

I paid the common toilet in the lobby a visit to find it as dirty as I had imagined. I have public toilet anxiety and I don’t feel comfortable using them. But I had to relive my self and there was no other choice. I closed my eyes, put a hand on my nose, and did the business as quickly as possible.

“You’re getting good at this, Parvez,” I told my self and got out of the hell chamber.

After a tiring journey, a shower would have been a great idea but I didn’t want to spend another moment in that bathroom.

I just went back to my room, changed, and all I remember after that was going to sleep.

The alarm had failed to do its job a few times before I finally woke up. I didn’t realize I was snoozing it in my sleep. When I woke up, the clock was one hour past the expected time of getting up at 7 AM.

I woke up and went back to the common toilet to relieve my self. “This is the last time I’m entering it,” I was thinking.

The next question was – “Where to take a shower?” The common bathroom was out of the question and I really wanted to take a bath. It had become a requirement now.

I was thinking about it when I heard some noise from the room in front of mine. Some guys were leaving the room. I spent 10 more minutes thinking about a possible solution to the ‘bath situation’ before realizing those guys had left the door open.

“Let’s check that room out,” I thought and sneaked into the room. There was no luggage. The room was completely empty and what do I see? A bathroom!

I opened the bathroom – which was relatively clean. Much cleaner than the common one.

“You are using this bathroom, Parvez,” I told my self with a grin on my chin.

I returned to my room and waited 10 more minutes. No one had returned to that room and the door was still open.

“That’s it. Can’t wait anymore. I am occupying that room!”

Occupying Someone’s Room for a Bath

I grabbed everything I needed to shave and to take a bath, locked my room, and entered the empty room.

As I brushed my teeth, I was feeling thankful for the bathroom. “Must be good karma,” I thought. I performed a nice shave afterward and started taking a shower.

It must have been around 15 minutes since I had entered this room. I was enjoying my bath and relieving my self from the tiredness.

“Feels so good,” I was thinking just when I heard a loud bang on the door outside.

“What! Who’s there now?” I turned the shower off. The bang continued. It wasn’t a knock. Someone was literally banging on the door.

“They must have returned. I’m in a mess. What do I do now?” All my excitement was now washed off. I was feeling like having an affair and getting caught. My karma had failed me pretty quick.

The bang stopped after a while. I waited for a moment before turning the shower on again. I wanted to finish the bath as quickly as possible now.

“If they’re still at the door, I will apologize and explain my situation,” I was thinking as I finished my bath.

I got out of the bathroom, put my clothes on, and opened the main door – ready to say “Look, I’m sorry, but…” To my surprise, there was no one waiting for me at the door.

I looked left, and I looked right, to find no one there.

“Phew. No one is there,” I virtually cleaned the sweat from my forehead as I rushed into my room.

It was time for me to leave the place. I put on the best clothes I could have for my upcoming flight, packed my things, and left the room.

There was no one from the last night present downstairs. I waited a while at the counter for someone to come and give me my change.

A person came after some time and gave me my money. I tried to bargain but it seemed worthless. I took the money and left the place.

From the narrow street, I came back to the main road and hired a taxi. Passing through the noisy and congested streets of Kathmandu, we reached the airport.

A Night At A Cheap Roadside Hotel in Kathmandu: Summary

After leaving Pokhara and getting stuck due to a landslide for hours, I had reached Kathmandu in the middle of the night.

I spent my night in a disgusting ultra-cheap place I don’t even know the name of. I had occupied someone’s room and took a shower in their bathroom while someone was banging on the door.

In just 24 hours, I had collected some lifetime experiences which no money could buy. I would not have faced any of these situations if I decided to fly to Kathmandu or stayed in a luxury hotel.

Uncertainty: That’s what I love the most about unplanned travels. Planned tours to an unknown place could be easy and comfortable. But my unplanned trips are way more exciting and fun.

What’s important, though, is that I am having all this fun by my self. I am just leaving everything to the uncertainty and with every step I take, I collect moments – some nice, really nice moments.

I don’t know if it was a wise decision to follow a stranger in the middle of the night. Were those drunk guys trustable? I don’t know that either. Was it okay that I occupied someone’s bathroom? Who knows.

What I do know, though, is that those 24 hours were the most memorable ones from my Nepal trip. I was ready to fly to Bhutan where more experiences were surely waiting for me.

What about you? You must have some interesting stories to share, too, right? I would love to hear them.

Also Read: Pokhara to Kathmandu via Bus: We Got Stuck In A Landslide for Hours