Pokhara to Kathmandu via Bus: When A 7-hour Journey Took 15 Hours 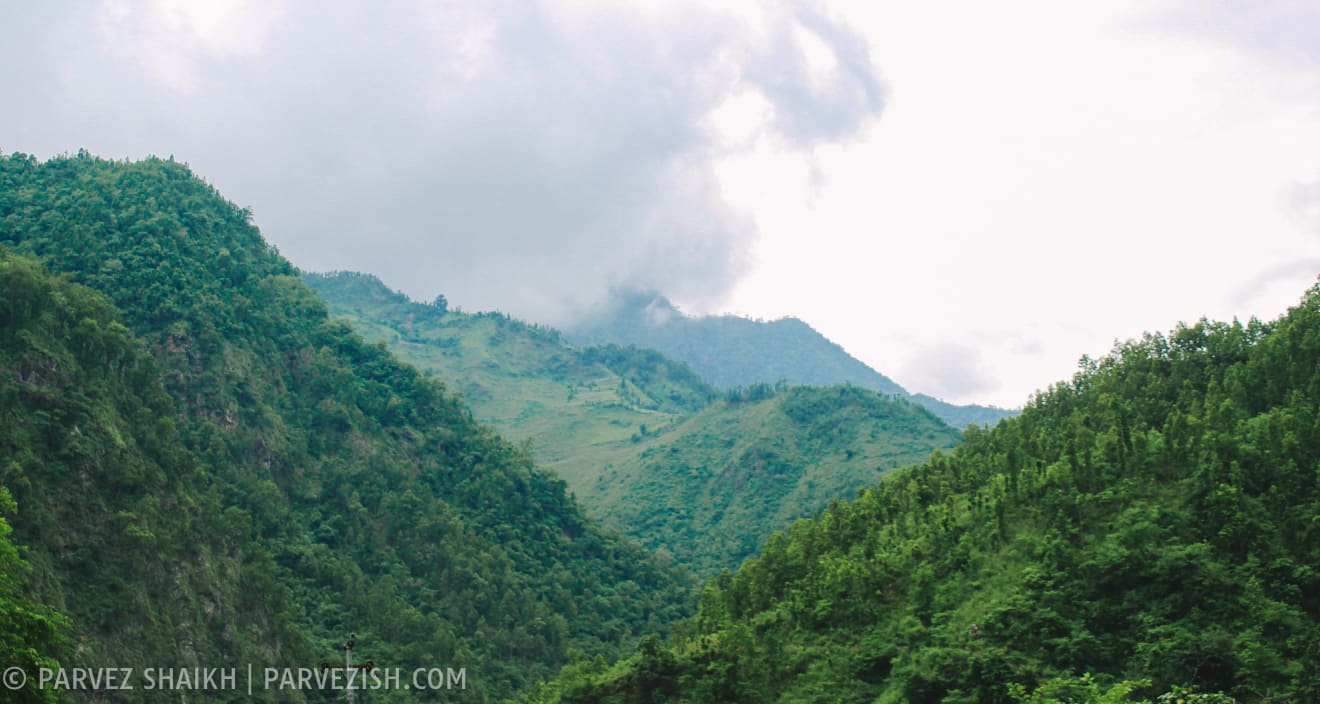 After an emotional departure from the Castle Resort, Poudel – my taxi driver – gave me a ride to the bus station. We looked for a passenger bus (I never took a tourist bus in Nepal) leaving from Pokhara to Kathmandu and found a bus ready to depart.

I became the last passenger they were waiting for. Someone put my rucksack in the luggage cabin, took my money, and asked me to have a seat. The bus – which was now filled with passengers – started moving through the city. It was to take us a while before we could reach the highway leading to Kathmandu.

I put on my favorite journey songs and had a trip down the memory lane. Thinking about how I made the decision to come on this trip and thanking myself for it, I was also remembering everyone I met during my journey and already missing them.

My co-passengers were busy watching an Indian movie while I was lost in my own thoughts. Those songs – one after another – were reminding me of my time in Nepal. Thinking about all the beautiful places I had visited and all those lovely people I met, I didn’t realize the bus was already on the Prithvi Highway.

The 174KM (108-mile) long Prithvi Highway connects Pokhara with Kathmandu – the capital of Nepal. The heavily congested two-lane highway provides a stunning view of the valley.

Taking us through the beautiful scenery and sharp turns, the bus was sailing smoothly on the highway. I was admiring the scenery while the bus suddenly stopped. I thought it was a checkpoint and the bus will start moving soon. But to everyone’s surprise, it didn’t.

When the bus didn’t move for more than 10 minutes, everyone started asking questions to each other. The young driver jumped out of his cabin. I looked out of the window and I could see there were other vehicles ahead of us.

“What’s happening,?” I asked the person whom I had given money before getting on the bus. “We don’t know,” he replied. “There’s a long queue of vehicles ahead of us. It could be an accident, but no one knows yet.”

We could see some police and other vehicles on another lane. Asking a policeman about the incident could not lead me to an answer.

I took a walk around and realized that the queue of vehicles was very long. I had seen such long queues in photographs only.

After talking to a few people, I came to know that there was a landslide somewhere ahead of us. The queue was almost 5 kilometres long, I was told.

“5 KMs? That’s insane?” I exclaimed. “When do you think this will clear up?” I asked the person.

“No one can tell that for sure,” the person replied. “It can take a long time. Hours, you know. Sometimes it takes a day or two.” He seemed pretty calm as he said that.

“Hours? Days? Why not?” I couldn’t seem to get the situation. The reason – as I figured out soon – was that I had never been in such situation before. I had enjoyed an uninterrupted journey so far and I didn’t realize this situation was a part of the journey, too.

We talked about for a few minutes before I took another walk around the place. It was clear that there was a huge landslide somewhere and we were stuck, for hours, if not days.

It’s Time to Kill the Time

After spending an hour on the road, I came back to my seat. Now it was time for me to learn how to kill the time.

The movie everyone was watching when the bus departed was now finished. There was another movie being played. Some passengers were outside the bus. Some others were watching the movie, while others were sleeping.

I took out my laptop and browsed photos from the whole trip. Photos are amazing things, aren’t they? They take us back in time so quickly. After going through those photos, I tried to listen to some songs.

Those songs were not able to take me down the memory lane any more. Mostly because the bus wasn’t moving and it was not giving me the feeling of ‘travelling.’

“I could read a book,” I thought. But my book was in my rucksack, which in turn, was in the luggage cabin – possibly behind many other bags.

I gave Joe a call and informed him of this situation. He or his staff members didn’t have an idea about this landslide. It wasn’t in the news yet, I guess.

I killed one more hour with everything I could. I had already ran out of ideas but there was no sign if we could move anytime soon.

A Hungry Man Without Food

It had been around 4 hours since the bus left Pokhara. I was getting hungry and I could see a few people eating some snacks they had brought with them.

I didn’t bring anything with me except some small Snickers – which I ate.

Some passengers were eating cucumbers bought from a vendor. I saw someone selling water bottles. The water I brought with me was almost finished, so I bought a bottle.

At first, I was reluctant to eat chips – especially buying it from a kid. I don’t eat chips and I felt bad about that kid who should have been at school. But I didn’t see an option on hand.

I bought two packs of potato chips and ate them. “This will keep me going for a while hopefully,” I thought.

“Okay, what should I do now?” I asked myself. I got out of the bus. There was an open area with some buildings around. I took my camera and wandered around the place to click some pictures.

The place was beautiful, I must say. We were surrounded by hills. It was drizzling now – adding more beauty to the place.

I entered one of those buildings which seemed to have been abandoned for a long time. It wasn’t hard to tell that they were being used as toilets and for ‘shady’ activities.

I felt like an urbex photographer while exploring these buildings one by one. It was fun and I spent about two hours doing photography.

We had spent hours without moving a single inch. But the earth was moving as usual. It was slowly getting dark as the evening approached the sunset.

No one had an idea when we could move. I came back to my seat. The TV was off now and almost everyone was sleeping. I felt like sleeping, too but couldn’t do that.

“What’s there for me ahead?” I was thinking. A few days ago, I wasn’t sure whether I wanted to go to Bhutan. Now that I had finally left Pokhara behind, I was stuck in a landslide thinking “I just don’t want to miss my flight tomorrow.”

Lost in thoughts and having a conversation with myself, I heard some vehicles honking. The bus driver jumped in and everyone standing outside were boarding the bus.

It was time for the bus to move. As the driver started the bus and it finally moved, I heard a sigh of relief echoing in the bus.

The bus was now slowly moving behind other vehicles. As we reached the place where the landslide had occurred, we could see how bad the traffic condition actually was.

The landslide didn’t affect the Pokhara – Kathmandu highway directly. But to clear the traffic, the authorities had to close the road. I found out later that the landslide had occurred at the intersection of Narayannagar – Mugling Highway and Prithvi Highway.

There was a long traffic for almost five kilometres. The vehicles in our lane were slowly moving while the opposite lane’s traffic was asked to stay put.

After we cleared out of the traffic, the bus began moving at a better speed. It was completely dark by now and we had a long way ahead of us before we could reach Kathmandu.

The fact that the bus was moving brought me relief. My hunger was dead and my excitement was back. It was time to put on some journey songs again.

After a few hours, the bus stopped at a small roadside eatery for dinner. We relieved ourselves in a stinky public toilet one by one and had dinner.

We Reach Kathmandu at Midnight

After dinner, the bus was back on the road. The road’s condition at some places was horrible. We had a rough ride to reach Kathmandu.

When we finally reached Kathmandu, it was midnight. It was probably 12:30 AM when I got off the bus. All my co-passengers were Nepali locals. One by one, they took transportation that was available to reach their destination.

I had no clue about where I was supposed to go. I had no destination, no hotel booking or anyone I knew in the city.

“Room?” A voice stuck my ears as I crossed the road in the dark. I saw a young guy on the side of the road who was looking for people. “Yes. How much for a night?” I asked.

I didn’t know whether I should trust him. It was middle of the night, I was at the side of the road, alone. My instincts were in favour of following the guy and if I sense something shady, I was supposed to run.

“Let’s checkout this guy’s place,” I told myself and started following his lead. I was keeping a distance from the guy. We reached the place after walking through some narrow streets.

What happened next? What happened at the ‘hotel’ the guy took me? Did I take the room? Was I able to sleep? There are many questions. And their answers would make a whole new article.

Read my experience in the next article – A Night At a Cheap Roadside Hotel in Kathmandu.

Pokhara to Kathmandu via Bus: Summary

I later found out that Nepal’s Prithvi Highway is considered one of the most dangerous roads in the world. Accidents and landslides are common on this highway.

I left Pokhara at around 9:30 in the morning. When I reached Kathmandu, it was almost 1:00 AM. I spent around 8 hours stuck at the same place due to a massive landslide on the Prithvi Highway. A journey which would have ideally ended in about 7 hours was extended to more than 15 hours.

Being the first time when I had faced such situation, I was annoyed at first before realising that it was just a part of my journey. Where’s the exciting part of a journey if everything goes as planned, anyway?

Throughout the day, I was able to observe the beauty around me. I observed the life on the road. Those young kids helping their families earn money, those drivers cooking food on the side of the road or sleeping uncomfortably anywhere they could find a place – these are realities of our life.

Sitting in our comfort zone, we would never face these realities. I, on my part, was glad to observe this and realised I had been living a much better life. A bus journey extended by a few hours was nothing to feel discomfort at.